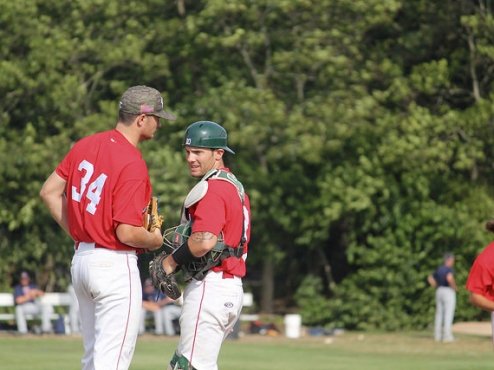 John Rooney took a stroll off the mound. Before that play, Rooney was dominating and the Gatemen had no answer for everything he was bringing. One pitch, one swing and one stroll later, a game he was dominating became a game he was trailing. ?But, he wasn?t ready to quit yet.

“Walk it off, look down, forget about it. New batter,? Rooney said. ?It?s what everyone?s looking for, how you face adversity. You can?t fall apart when that stuff happens.?

Rooney went on to finish off the next batter and the next full inning after that to cap off his game on the mound. Despite giving up a home run, the two-hit gem was one of Rooney?s better outings of the year. During the contest on Friday, he showed all the skills that make him a rotation starter for the hottest team in the CCBL.

“It?s more mental than physical in this game,? Rooney said. ?There?s one pitch the whole game I thought was bad. You just got to get over it.?

Rooney was virtually unhittable the whole game. ?He held a no-hitter through four and two-third innings and had only allowed three base runners to reach safely. Holding only a 1-0 lead for most of his start, the two-run home run he allowed was a big blow to Rooney?s line as he was unable to walk away from the start with a win. Still, Rooney said he?s just happy that he contributed to yet another win for the Red Sox, who have now won seven in a row and 10 of its last 11.

He acknowledged the home run, playing with the short fence at ?Red? Wilson Field, would have probably been a fly out at most ball parks on the Cape. ?It was lofted high, but just over the left field fence just 330 feet from home plate. Given the dimensions of the field and how dominant he was pitching, it was an unfortunate play.

The lefty gave onlookers another glimpse of his dominant pick off move in the second inning when he caught Wareham Infielder Robert Metz learning to maintain the minimum batters faced.

“I?m really confident with it now,? Rooney said of his move. ?I hadn?t faced Wareham yet, so I knew I was going to get at least one or two. You just got to know that you can throw it, keep them honest.?

Rooney noted that whenever a runner gets on base he is extremely confident, say he knows ?there?s a really good chance? he?ll get the runner out at first. Rooney had just one against Wareham after recording an extremely impressive four pickoffs in his last start.

He feels that while other pitchers are starting to get tired arms, each start he has is ?stronger? and the stats tell that story. Rooney?s five strikeouts are his second highest mark of the season and he now ranks fourth amongst Y-D pitchers in that category. The two hits are the fewest he has allowed all season and the outing allowed his ERA to drop to a respectable 4.78, right on par with a few other Y-D starters.

Cody Martin, who was called up on July 14th when Y-D won the first game of its now seven-game win streak, caught Rooney for the first time on Friday and liked what he saw.

“He was nails out there,? Martin said. ?He was mixing things up really well. He was really good, keeping guys off balance.?

Martin was jubilant when discussing his opportunity to catch for Y-D this summer. ?He noted that he hadn?t been playing Summer ball before Manager Scott Pickler decided to give him a call and that the adjustment has been a big one. But, taking calls from Pickler all game long, he says his new coach ?makes it easy? on him and allows him to play off of the flow of the game as he calls it.

He spoke highly of Rooney?s ability on the mound, particularly of the pickoff move where he said he?s ?never seen a lefty with that good a move?. He said that it doesn?t fake him out, but is impressed with a number of runners he gets learning.

The game changed after Rooney was pulled as Andrew Quezada came in and surrendered two runs in the seventh. The Red Sox scored three runs in the subsequent half inning and maintained that one-run lead to beat the Gatemen. Rooney joked that he was ?going to beat up? Quezada for stealing the victory as this is the second time Quezada has earned the win during one of Rooney?s starts but seemed happy that the game ended the way it did.

“(Quezada) always jokes with me about taking the win, but I don?t really care,? Rooney laughed. ?As long as we win, I?m happy.?

Rooney and the Red Sox are riding one of the hottest streaks of the CCBL season. He seemed entirely confident in the team?s ability to finish after witnessing this stretch. ?In the team, he sees something elite and in himself, he?s just excited to see something more.

“I feel an improvement,? Rooney said. ?It?s a game of improving every day and I feel stronger.?