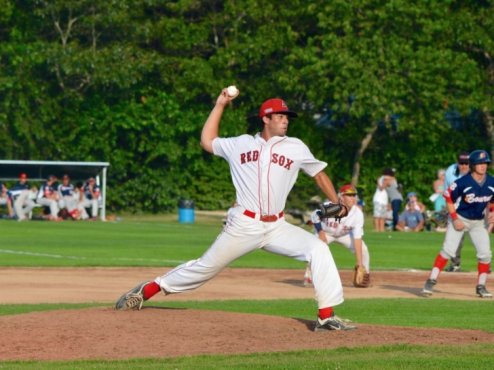 The Yarmouth-Dennis Red Sox (19-20) tied the game up in the seventh inning but couldn?t outlast the Bourne Braves (19-18-2) in extra innings on Tuesday.

The 5-3 loss in ten innings marks Y-D?s second straight loss but only their second loss in their last seven games at Red Wilson Field.

The two teams combined for only eleven hits, in large part due to good pitching performances. Keegan Akin (Western Michigan) pitched five innings and only allowed three hits and one run.

Brett Adcock (Michigan) has been inconsistent this summer and continued that pattern on Tuesday. He only lasted four innings and allowed three hits and two runs. The most startling number is that he walked five batters. Coming into Tuesday?s game, Adcock led the league with 24 walks.

Alec Eisenberg (Hofstra) inherited a bases loaded, no outs situation in the fifth inning after Adcock walked three straight batters then hit one with a pitch. Eisenberg only faced two batters and ended the inning without allowing any additional runs.

Adcock gave Eisenberg a big hug when he came off the field and, according to Eisenberg, thanked him for getting him out of the jam. He said that it is great playing for a team with such depth in the bullpen because they can really trust each other to have your back.

Despite the lack of offense, Cole Billingsley (South Alabama) extended his on-base streak to 21 games. He went 1-for-5 on the day and second baseman Tommy Edman (Stanford) went 2-for-5.

Edman, who hit a big two-out, two-RBI single in the seventh inning, has been arguably the most important piece of the Red Sox lineup. While he says he doesn?t consider himself a clutch player, he prides himself on staying levelheaded in those kinds of situations. He credits much of his success this season to Donnie Walton (Oklahoma State) and Gio Brusa (Pacific), who bat behind Edman in the lineup.

Nathan Rodriguez?s (Arkansas) bat has been heating up lately and he provided a big hit in the Sox?s loss. His two-out RBI double in the fifth inning gave Y-D their first run.

The game finally slipped out of reach when reliever Chad Hockin (Calif. St. Fullerton) walked in two batters in the tenth inning. The Braves would go on to win by that margin.

The Red Sox look to make up for the loss with a win against the Wareham Gatemen (15-22-2) on Wednesday at 7 p.m. at Spillane Field.