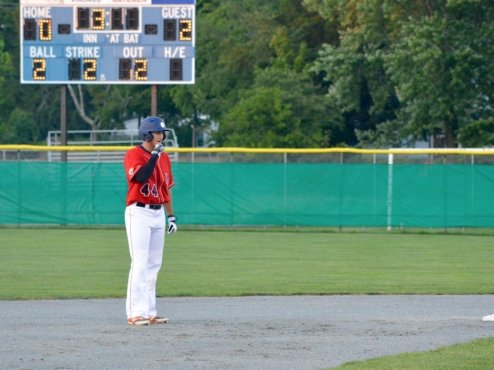 Ricky Thomas (Fresno State) earned his seventh win of the season in a 9-1 victory over the Wareham Gatemen (15-23-2) at Spillane Field on Wednesday night.

With both teams winning on Wednesday, the Yarmouth-Dennis Red Sox (20-20) remain one game ahead of the Harwich Mariners (18-20-2) for fourth place in the East Division.

Thomas became the first pitcher in the Cape League to win seven games. He pitched 6.2 innings, allowed five hits, gave up one run, and struck out eight batters. He now averages more than one strikeout per inning and has an ERA of 1.02.

The game went by quickly until a big Sox rally in the top of the eighth inning. Gio Brusa (Pacific) went 2-for-5 with one run and three RBIs and doubled twice in that inning. He said, ?I thought I might have had a chance (for a home run) on one of those but I didn?t quite get all of it.?

When asked how he continues to bat better and better as the season progresses, he said, ?I think it?s getting in a rhythm. I think getting at bats every day constantly helps me with rhythm. Hitting is timing.?

Wrenn said, ?I was just told I was leading off so I was excited.? When nobody?s on base you?re just trying to get on base, see some pitches, and let the other guys see what the pitcher is throwing so (it changes my approach) a little bit but not too much.?

The Red Sox hope to continue their playoff push on Thursday at 7 p.m. against the Chatham Anglers (22-18) at Veterans Field.