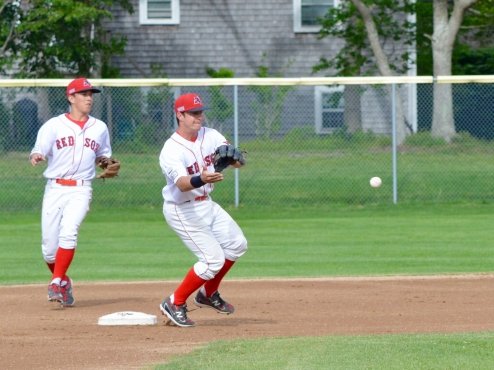 SOUTH YARMOUTH ? The Yarmouth-Dennis Red Sox (3-5) bats finally came alive in the ninth inning, but it was too late to overcome the Orleans Firebirds (7-2), dropping the second game of a home-at-home series Wednesday evening, 6-5.

Trailing by five runs entering the bottom of the ninth with only four hits to their name, the Red Sox sent up catcher Dan Rizzie (Xavier) to get the rally started. He reached on a single off Firebirds closer Jason Harper (Southern Connecticut). Following a line-out to rightfield by lead-off man Cole Billingsley (South Alabama), Y-D rattled off three straight hits from Tommy Edman (Stanford), Donnie Walton (OK State) and Michael Donadio (St. John?s) and scored three runs to cut the Orleans lead to one.

But that?s as close as they would get on the Cape League-leading Firebirds, who are riding a four-game win streak.

The writing on the wall is evident with Y-D; they can?t seem to capitalize on situational hitting. They rank fifth in the league in total bases at 79, despite a subpar .297 on base percentage ? which isn?t all that bad considering their team average is below the Mendoza line of .215.

What?s really alarming is the amount of men they?ve left on base to start the season. Through nine games the Red Sox offense has left 66 men on base after leaving another 10 on Wednesday night ? good for an average of 7.33 men left on base a game.

Starting pitcher LHP Brett Adcock, a standout in the Big 10 tournament for Michigan, (0-1) lasted only four innings and surrendered three runs on four hits and three walks through 67 pitches ? and saw his era balloon to 8.31. He got through his first inning of work in quick fashion, sending down the first three Firebird hitters on seven pitches. But then labored through the next fifteen batters faced ? pitching the count full to five.

Firebirds starter LHP Eric Lauer (2-0), a junior from Kent State, wasn?t as dominant as his June 11 five inning, seven strikeout gem against the Red Sox, but pitched well enough to get the win despite his defense committing four errors on the evening.

Billingsley got the Red Sox offense moving out of the gates with a lead-off single in the top of the first followed by a fielder?s choice by Edman, who came around to score the first run of the game on an error by Orleans second baseman Bryson Brigman off the bat of Donadio. But the lead didn?t last long as the heart of the Firebirds order went was issued a walk and then hit back-to-back seeing-eye-singles to reclaim the lead at 2-1 and never relinquished it.

RHP Alec Eisenberg (Hofstra) was expected to take the mound in the start, but came on in a relief effort and gave up one run over 2.1 innings on three hits.

Walton continues to show off a razor-sharp batting eye with another 3-for-5 performance against the Redbirds, batting a robust .600 in the two-game series. Through eight games he?s currently 10th in overall average in the Cape League at .323 while driving in four runs and scoring four from the three spot in the lineup.

The loss drops the Red Sox into last place of the East Division as they have yet to beat a divisional opponent this season ? although they have played Orleans in three of their five divisional games thus far.

The Red Sox will have a much-needed off day tomorrow but will return to action on the road against the Brewster Whitecaps Friday, June 19 at Stony Brook School Field at 5 pm EST. They?ll look to end their two-game skid and notch their first divisional win of the young season.