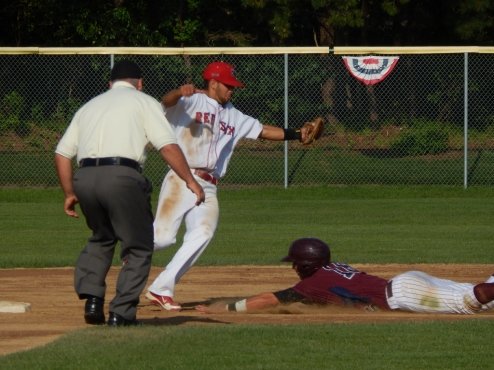 The Yarmouth-Dennis Red Sox returned home to take on the Cotuit Kettleers after losing two games on the road. The Sox (15-17-1) went down early to the Kettleers (18-14-1)

The Red Sox started the game with Sam Lindquist on the mound. Lindquist pitched five innings where two unearned runs scored. He let up four hits, walked four and struck out one. His ERA improved to 2.45 in his fourth appearance and second start of the season. The righty is still looking for his first decision since joining the Red Sox.

Sam Coonrod (1-1) would pitch two innings for the sox and only let up one hit. He walked one batter and struck out two. Picking up the win was Kody Kerski (3-0) who has been reliable for the Sox out of the bullpen. Kerski pitched one inning and let up one hit. His ERA improves to .75 on the season.

Darrell Hunter (1-1) picked up his fifth save of the season and his ERA improved to 4.02. Hunter let up two hits and one unearned run scored in his one inning pitched. He struck out three batters.

The two through five spots in the lineup recorded the team?s eight hits and four runs. D.J. Stewart went two for four for Y-D . He also drove in a run and scored twice. Alex Blandino reached base two out of his three at-bats. Cole Peragine went one for three with a run and a walk. Jose Trevino proved why his nickname is ?Mr. Clutch,? driving in the go ahead run in the eighth inning and scoring the winning run later that inning. Trevino went three for four in the game.

The Red Sox visit the Orleans Firebirds Monday at Eldredge Park at 7 p.m. EST. The Firebirds (15-18-0) are just one point behind the Sox for third place in the Eastern Division standings. Be sure to check our Twitter and Facebook pages for live updates on the team and the game.

6. Auston Bousfield reached on an error by the short stop and advanced to second. Trevino scored. COT 2 ? YD 4.