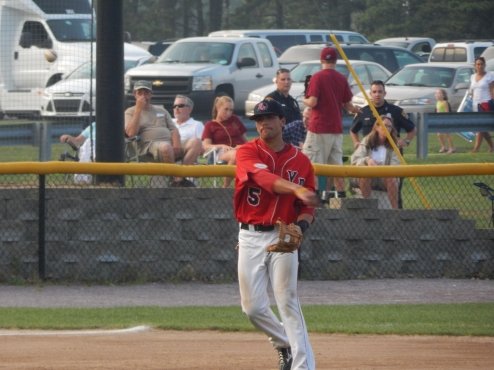 Ryan Kellogg started on the mound for the Braves. Kellogg (W, 3-0) pitched five innings in which he allowed one run on four hits. He struck out three batters and walked one.

Throwing for the Sox was Jose Lopez. Lopez (L, 0-3) let up five runs on six hits, walking and striking out one batter. He pitched 1.1 innings and faced 11 batters. Lopez was replaced with Jordan Minch (0-2) who pitched 2.2 innings. Minch let up two runs on six hits. He also walked and struck out one.

The Red Sox put up 11 hits in the game. Cole Peragine went three for five with an RBI and a strikeout. Auston Bousfield went two for three with a walk, strikeout and a run. Matt Honchel pinch hit and ended up with one hit in his only at bat.

Jose Trevino started in right field and went one for four. Trevino would close the game out on the mound, earning one strikeout.

The Red Sox return home Sunday night to take on the Cotuit Kettleers at Red Wilson field at 5 p.m. EST. Be sure to check our Twitter and Facebook pages for live updates and as always our live broadcast with Cody, Chris and Ryan starts shortly before first pitch.