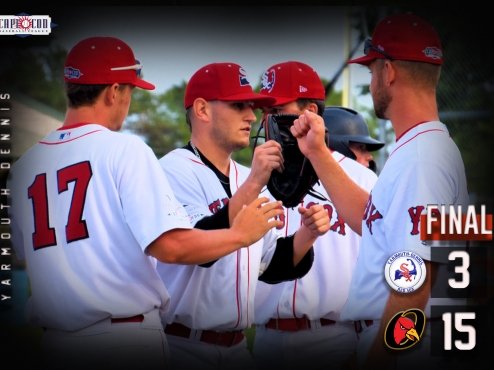 ORLEANS ? Following an outstanding pitching performance against the Anglers, the Red Sox looked like a different team on Saturday night. The Orleans Firebirds had everything going for them, en route to a 15-3 victory over Y-D. It was ugly from the beginning, but hopefully the Sox can quickly forget about this one and put it behind them.

Brandon Dufault (Northeastern) was the starter for Y-D and struggled early on. Following a leadoff base hit to kick off the game, Zach Britton (Louisville) hit an RBI double and the Firebirds had a 1-0 lead two batters in. After one run had already crossed the plate in the second inning, Britton ripped a three-run home run, his first of the year.

The 5-0 advantage didn?t last long, as Brad Beesley (Cal Poly) reached with a leadoff walk in the third inning. He then made it to third base, before Noah Campbell (South Carolina) drove him in with a groundout.

Unfortunately for the Red Sox, the third would be the only inning in which they were able to keep Orleans off of the board. Shay Whitcomb (UC San Diego) led off with a solo home run, before the flood gates opened with four more Firebirds scoring in the inning. The 10-1 lead grew to 12-1 through five innings of play, putting the game all but out of reach.

With two outs in the sixth, Y-D strung together a couple of big hits, although it was too little too late. Beesley has been hitting the ball well as of late, and he continued doing so with an RBI double. Austin Wells (Arizona) drove him in with a single to right field, making the score 12-3.

That was the last sign of life for the Red Sox, as they would go on to lose 15-3. Britton finished with two home runs, a double, and six runs batted in ? one helluva night. One good sign for Y-D is that their newly announced all-stars all played well tonight. Wells and Campbell both drove in runs, while Riley King (Georgia) had a pair of hits and Wyatt Young (Pepperdine) had one of his own.

With Chatham coming away with a win tonight, the Red Sox now fall to second in the Eastern Division with a 15-11-2 record. They are two points ahead of the Firebirds in the standings, which means things are getting awfully tight as we hit the home stretch here in mid-July.

The Red Sox will host the Falmouth Commodores at 5:00 P.M. at Red Wilson Field on Sunday night.