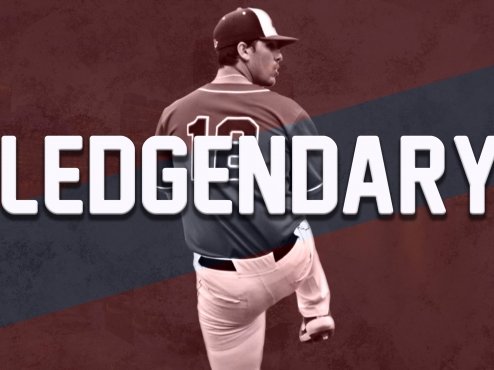 SOUTH YARMOUTH ? Six days after throwing five scoreless innings in a 4-0 win against the Orleans Firebirds, Ledgend Smith (Oklahoma) retired the first 11 batters of the high-powered Chatham Anglers offense. He gave up just two hits and no runs in six innings of work. The Red Sox and Anglers tied 1-1 and are tied for first in the East Division.

The Red Sox celebrated Red Shirt Friday as the home team by sporting their customized red jerseys and camouflage caps to honor the troops ? a tradition that began in the Cape League a decade ago. Before first pitch, the Red Sox honored Yarmouth Deputy Police Chief ?Steven Xiarhos, whose son ? United States Marine Corps Corporal Nicholas G. Xiarhos ? was killed by a roadside bomb in Afghanistan in 2009. Nicholas attended and played baseball at Dennis-Yarmouth Regional High School, the home of the Red Sox.

Both offenses were quiet last night. Brad Beesley (Cal Poly San Luis Obispo) accounted for three of the Red Sox?s four hits, and Jake Palmer (UC Irvine) ? who hit in the leadoff spot while top hitter Wyatt Young (Pepperdine) took a day off ? had the other hit. No Red Sox batter recorded a hit after the bottom of the third inning. Y-D got their first and only run of the game in the bottom of the first, beginning with a line drive into left field by Palmer, followed by a liner into the right-center gap by Beesley, a walk drawn by birthday boy Austin Wells (Arizona), and a sac fly by Noah Campbell (South Carolina).

The Chatham offense only managed to get five hits. In 6.1 innings, Smith gave up two hits, one walk, and no runs in just his second start of the summer ? his other four appearances for the Red Sox were out of the bullpen. In fact, none of his 36 appearances for the Sooners over his first two years of college ball were starts. Cullen Kafka (Oregon) struck out two and gave up three hits and one run in 1.2 innings of work. Jacob Winger (High Point) walked one and struck out one in one inning.

The Anglers tied the game up in the top of the eighth inning, scoring one run on three hits and a free base.

The Red Sox had an opportunity to win the game on a walk-off and take sole possession of first place in the bottom of the ninth when Beesley singled into center field and stole second. Campbell was intentionally walked to put runners on one and two, but the Anglers got out of the inning by inducing a fielder?s choice and a groundout.

The Red Sox will travel to Eldredge Park tonight to take on the second-place Firebirds. First pitch is set for 7 p.m.

10th Annual Big Nick?s Ride for the Cape Cod Fallen: Over 1,000 motorcycles will ride across the Cape Sunday, July 21, from 9 a.m. to 1 p.m. ? in memory of all 16 of the fallen heroes who had ties to Cape Cod. The event will begin at the Barnstable County Correctional Facility and end 35 miles later at Dennis-Yarmouth Regional High School.