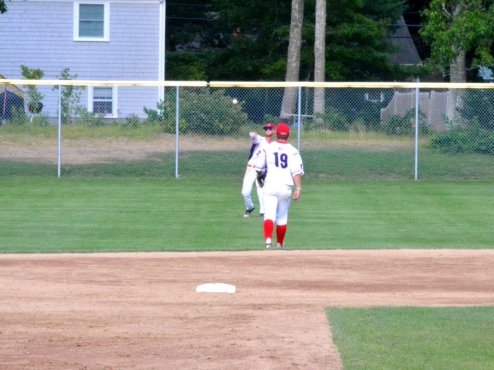 Kevin Smith (Maryland) drew a walk to get the tenth inning started, and with great base running, stole second and advanced to third on a wild pitch. Deon Stafford Jr. (Saint Joseph?s) and Matt Winaker (Stanford) both walked as well, loading the bases. On the third pitch of the at-bat, Persinger hit a pop fly to right field, and Smith was able to beat the tag of Drew Lugbauer (Michigan) at the plate.

Despite the 14 total hits in the ballgame, it was a pitcher?s duel as it was scoreless through nine.

Bryan Sammons (Western Carolina) picked up where he left off after having a remarkable performance against Orleans on July 13. He tossed a solid seven innings, fanned five Orleans batters and walked two. After the outing, Sammons has a 1.15 ERA, with 21 strikeouts and only seven walks in 23.1 innings pitched on the summer campaign.

Nathan Kuchta (San Diego) came in to relieve Sammons and was lights out. He pitched two innings, whiffed two and gave up two hits. Calvin Faucher (California Irvine, 3-0) replaced Kuchta in the tenth and picked up the win.

Jason Morgan (North Carolina) was on the bump for Orleans and was nothing short of tremendous. Morgan?s outing lasted for six innings, while he struck out five and held the dangerous Red Sox offense to only three hits. Brandon Bielak (Notre Dame, 2-1) substituted for Zach Logue (Kentucky) in the eighth and was impressive. He went two innings with two strikeouts and one earned run. However, Bielak was faced with his first loss of the season.