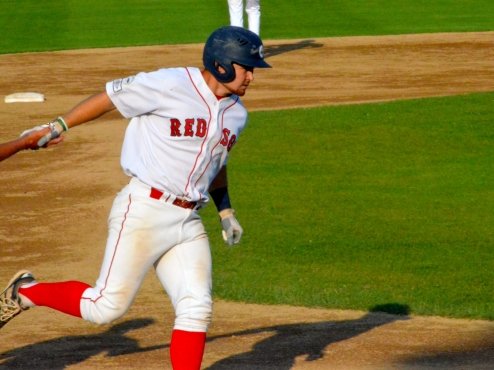 SOUTH YARMOUTH, Mass. ? On the back of 4.2 shutout innings by Michael Baumann (Jacksonville) and two hits and a RBI by Deon Stafford Jr. (Saint Joseph?s), the Yarmouth-Dennis Red Sox (21-12) defeated the Hyannis Harbor Hawks (15-18) by a score of 5-1 on Wednesday night. The Red Sox got out to an early lead and kept Hyannis out of striking distance for most of the game.

The Harbor Hawks loaded the bases in the top of the first inning, but it was the Red Sox that pushed across the first run of the game in the bottom half of the inning. Matt Winaker (Stanford) lead off the frame with a single to right field and advanced to second on a groundout by JJ Muno (California Santa Barbara). A balk by Alex House (Florida Atlantic) pushed him to third, and Winaker scored on a single down the left field line by Stafford.

Y-D kept the pressure on in the second, as Will Toffey (Vanderbilt) scored when House was charged with his second balk of the game. Nolan Brown (Texas Christian) was hit by a pitch and Connor Wanhanen (Texas Christian) singled through the left side of the infield to load the bases, and Winaker drew a walk to force in the third run of the game for the Red Sox. A sacrifice fly by Muno then extended the lead to 4-0.

Hyannis threatened in the top of the seventh after an infield single loaded the bases with one out. But, Pat Vanderslice (Saint Joseph?s) was able to get Dylan Busby (Florida State) to pop out and Cody Henry (Alabama) to ground out to second to end the inning.

The Harbor Hawks pushed their lone run across in the top of the ninth, as Jordan Rodgers (Tennessee) hit a 2-2 pitch from Sam Delaplane (Eastern Michigan) over the right field fence. Rodgers has been tough against the Red Sox this season, going 5-for-9 with three home runs in three games against them.

Baumann (2-2) got the start for the Red Sox and was ?effectively wild?, holding Hyannis scoreless through 4.2 innings and recording seven strikeouts, but walking six batters. His pitches looked great ? his fastball clocked in at 94-96 mph ? but he struggled with control, which drove up his pitch count and got him into a few tough situations.

Alex House (0-2) took the hill for the Harbor Hawks and was charged with the loss, allowing five runs on six hits over five innings of work. Vanderslice earned the win for the Red Sox, moving to 1-4 on the season.

With the victory, the Red Sox reclaim first place in the East Divison, as the second-place Harwich Mariners lost to the Falmouth Commodores on Wednesday. Y-D has opened up a two-point lead over the Mariners and are nine points ahead of the Orleans Firebirds, who are in third place.

Wednesday night?s game was televised on Fox College Sports for their coverage of the Cape League throughout July. They will also be covering the All-Star Game on Saturday night in Chatham.

The Red Sox are back in action on Thursday night in Cotuit, with the first pitch coming at 5 p.m.rn