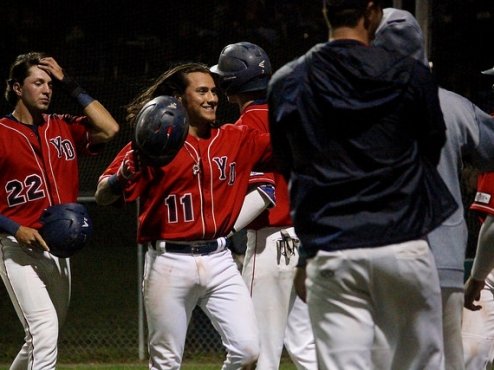 Nick Quintana brushed against the dirt stain on the back of his ripped left pant. He was all smiles before but was beginning to look anxious as an impatient Scott Pickler motioned him to the buses.

“Hurry up, superstar,? yelled an Orleans player readying the tarp at home plate.

Quintana quickly let out another grin. ?He was admiring the moment, in a season where he feels he?s struggled, he came through when it mattered most.

“It was a ?Hell yeah!?,? Quintana said of his emotions as he watched the ball go out over the left field fence. ?I was sprinting around those bases, I couldn?t wait to get in the dugout.?

Quintana came through for the Red Sox in the tenth inning with a game-winning two run home run. It was the cap of a 2-2 night for Quintana in which he reached base safely every time he came up to the plate, working two walks along the way. ?He is 5-6 over his last two and his surge lifted Y-D past first-seeded Orleans to pull them within one point of the Firebirds.

“The energy of the game just takes over,? Quintana said. ??One swing of the bat can change the game, in the blink of an eye.?

He was fully aware of the pressure of the situation. ?He knew that Orleans and Y-D are the two best teams in the league and it was telling of the emotion of the game that the Red Sox wanted the win badly. He laughed talking about each team?s rank in the division saying, ?they?re one, we?re two, I guess.? After beating the Firebirds five times, it?s easy to forget.

Alfonso Rivas, Quintana?s teammate at Arizona, said after the loss on Wednesday to Harwich that the nine game win streak will provide more of a momentum boost than a close loss to the struggling Mariners can take away. In the beginning innings that didn?t seem like it would hold true.

Mental errors plagued the Red Sox in the early going. After the Firebirds scored a run on a single to right field, the ball was thrown in to Connor Kaiser. Attempting to communicate something to his outfield, he had his back turned to a live play. ?Unknowingly to Kaiser, Orleans? Ethan Paul took off for home and Kaiser nor any other Y-D position player acted quick enough, allowing another run to score.

Even after the Red Sox came back to tie the game, baserunning blunders prevented them from pushing ahead. Christian Koss got caught taking too wide of a turn in the second inning on a Jake Slaughter single to right. It led to the second out of the inning which was followed up by a Drew Mendoza strikeout to end an inning where the Red Sox were threatening. Multiple players were also caught stealing and the pitchers combined for three hit batsmen.

It was an ugly start to the game as Y-D didn?t look like they came prepared to play early on. That all changed thanks to some slick defensive plays by none other than the Y-D relief pitchers.

With the game still tied in the bottom of the ninth, the Firebirds were looking to win it with no outs and men on first and second. ?The middle-infielder Paul laid down a bunt which Riley McCauley fielded on his left side. ?With no time to spare, McCauley quickly popped the ball out of his glove and gave a perfect backhanded toss to Christian Koss at third base, blanking the lead runner.

“I knew (Orleans was) going to bunt,? McCauley said. ?I just bounced off the mound as fast as I could and got it out as quick as possible.?

McCauley said his fielding prowess comes from years of playing shortstop. ?He played the position all through high school and was recruited to Michigan State to play the position. Upon arriving he was converted into a closer and now ranks favorably amongst some of the best relief pitchers in the CCBL. He said that play was no surprise.

“I guess it just stuck with me through the years,? he said.

Still in a tough position, McCauley recorded a strikeout for the second out of the inning but walked the next batter to load the bases. With the winning run just 90 feet from home for Orleans, McCauley battled against Jimmy Herron through eight pitches of the at bat which consisted of three two-strike foul balls, the tension rising with each ball tipped to the backstop.

McCauley dealt the last pitch and forced a grounder to Connor Kaiser who collected the ball, fired and delivered a short throw to Drew Mendoza who saved him with the scoop. Releasing all the stress created by that inning, McCauley let out a loud yell after the play and pumped his fist in celebration.

“It meant a lot, it was either they win or we go to extras,? McCauley said. ?We want to get in first place, we want to get on a roll going into the playoffs. That gave us the best chance.?

He also noted that beating Orleans was a huge spot, which he said added to the emotion on that play.

Quintana was ultimately the hero the a game that was so important for the Red Sox. He acknowledged his struggles and the adjustments he?s been making. He noted his teammates and coaches have told him through his tougher stretches of the year that he stays ?the same? which has motivated him to keep his head up and look forward to the next opportunity.

He has been impressed with how the team has played over the last couple of games, but with things finally coming together for him at the plate he expects even bigger things in the near future.

“These last three weeks went by so (quickly),? Quintana said. ?Even though I?ve been struggling, we?ve still been winning. If I could get my bat going, this can take off.?