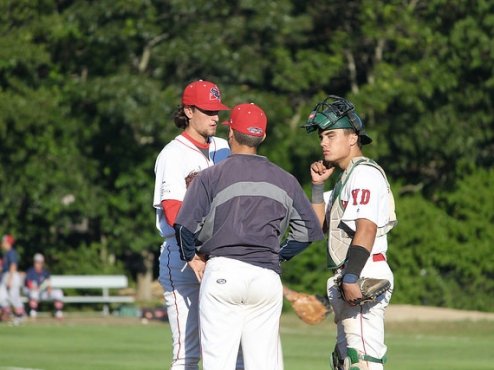 Alfonso Rivas set at the plate. ?Just a few minutes earlier the Red Sox threatened with no outs and two on. Just one run away from tying the game, Rivas was the last chance Y-D had to preserve the win streak. ?Rivas has delivered in this situation before. On July 11 and on July 14, Rivas recorded game-winning hits in the ninth inning for the Red Sox, he was used to that. ?But, when the 1-2 pitch sailed past his swinging bat, it was something new.

“He threw me a fastball up and I chased,? Rivas said. ?I?ll look past it, it?s just how baseball works.?

The Red Sox faltered in some key situations in its 6-5 loss to the Mariners. ?Situations that would turn out positively during its win streak did not go the Red Sox way on Wednesday. The mistakes they made in these situations proved too tough to overcome even against a struggling Mariners team.

“(You can?t) make the situation any bigger than what it is,? Rivas said. ?It?s still pitcher against hitter, still throwing a baseball, he?s trying to get you out and you?re trying to get him out.?

The Red Sox snapped its nine-game winning streak on Wednesday. ?Red Sox personnel, before the game, said that over the last couple of summers, even those in which Y-D has won three straight titles, ten games in a row would be unchartered territory. That statement proved too powerful for a Red Sox team that has looked like the most unstoppable force in the CCBL.

Y-D did all they could to prevent the loss. In the second inning, Carlos Cortes sprinted to a ball dropping into left field foul territory. ?He laid out horizontally, glided and made the catch as shocked fans watched. It was an impressive catch, one that starting pitcher Tim Brennan acknowledged with a point out to left field. The defense has highlighted the Red Sox win streak and that was one of the teams more impressive plays.

The fifth inning of the game proved to be the most costly. Brennan had been dealing prior. Only allowing three base runners prior to the inning and playing with a lead, the momentum looked to be in his favor. But, a bevy of hits capped off by a three run home run found Brennan playing from behind and scraping for the win.

“I threw a decent pitch and he just got under it,? Brennan said. ?It?s part of being a pitcher: come back and throw a strike on the next pitch.?

Brennan acknowledged that there had been a few balls hit out of ?Red? Wilson that weren?t ?crushed?, but he said that?s not something you should hang your head over.

He seemed disappointed with how the start turned out and wasn?t surprised by his early success. ?He said it was his fourth time facing the Mariners and he was ?excited? because he knew exactly what to expect.He added that its struggles were not a concern to him at all because he approaches every opponent he faces ?the same.?

After the fifth, the Red Sox played from behind the entire game. ?A late run in the ninth almost had the Red Sox take a step toward immortality, but now they are just trying to come back to life.