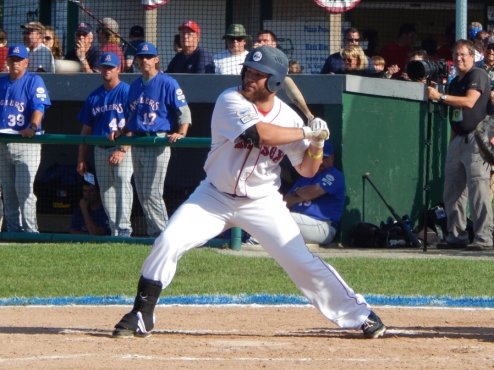 DJ Stewart had a solo home run, but the Chatham Anglers were too much for the Y-D Red Sox Wednesday night, sweeping the teams? playoff series 2-0. Stewart finished the 2013 summer with a .274 batting average, 4 home runs, and 25 runs batted in. PHOTO: Katie Carlson/Y-D Red Sox

The Chatham Anglers finished the sweep of the Yarmouth-Dennis Red Sox with a 9-4 victory at Red Wilson Field Wednesday night.

Chatham moved to 21-0 on the summer when they score first, striking for two runs in the top of the first inning off of YD starter James Kaprielian. Jimmy Pickens and Michael Russell both hit RBI singles in the first to take an early 2-0 lead.

YD would get a run in the fifth, and then take a 3-2 lead in the bottom of the sixth. Chatham refused to go down without a fight as they tied the game the next inning on an RBI fielder?s choice from JD Davis.

Davis would come up big in this game once again in the top of the eighth as he blew the game open with a grand slam to take a 9-3 lead and put the dagger in the YD Sox? 2013 season.

Chatham will play the winner of the Orleans vs. Harwich series on the other side of the Eastern Division. That series will start Friday night in Chatham.