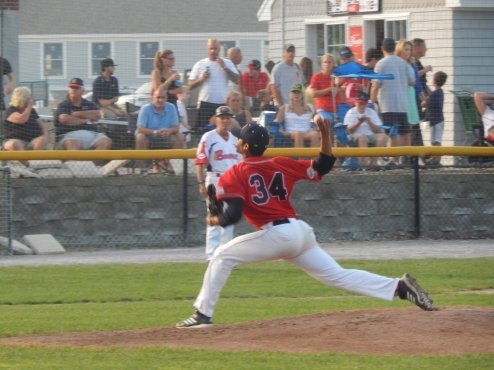 It was a nail biter of a game for the first eight innings at Red Wilson Field where the score stayed at 2-1, until a four run ninth inning by Hyannis to take a 6-1 lead.

Jose Lopez made his fourth start of the summer for the Sox and dazzled for 6.2 innings of three hit ball. He allowed two runs, but both were unearned. Lopez also struck out eight and didn?t walk a hitter.

The Sox took an early 1-0 lead on a solo home run from Brandon Downes. It was Downes second homer in the same week, and third of the summer. That put the Sox up 1-0, where the Hawks would answer back in the fifth with two runs of their own to take a 2-1 advantage.

The scoreboard did not change for the three innings until the top of the ninth when the Hawks plated four runners to add insurance to their 2-1 lead, and ultimately tacked on the final runs of the game to lead 6-1.

Rocky McCord picked up his first win on the summer for Hyannis while Jordan DeLorenzo gathered the save.

With the loss, YD is now locked into the 4 seed and will face Chatham in the first round of the playoffs. Their regular season finale is tomorrow night in Hyannis, and game one of the playoffs will be on Tuesday night in Chatham.