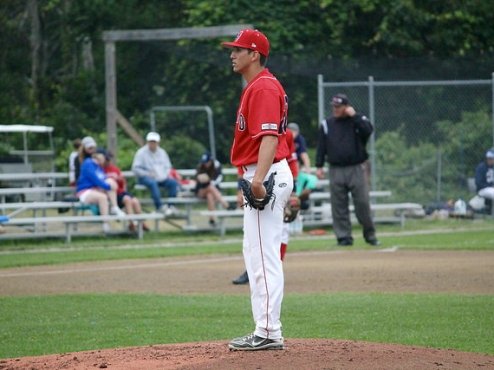 As the cloud cover thickened on a windy, chilly day at Stony Brook field, Andrew Quezada readied for his next pitch.? The overcast loomed and damage threatened with the bases loaded and just one out.? Quezada attacked the next two Whitecap batters, striking both out to end the inning. While the clouds stayed, the moment brightened up a Y-D dugout that feared for the first time in a while that it might be out of luck.

?At first glance, you see runners on base and you get a little nervous,? Quezada said. ?To get out of that unscathed, it?s big.?

Quezada made his first start of the season for the Red Sox on the mound going six strong innings of no-run ball on the mound. He allowed just five baserunners and took a one-hitter into the fifth inning of the game.

?Just taking it pitch by pitch,? Quezada said. ?Executing it one pitch at a time and not trying to do too much. It was working for me.?

The position was one that Quezada was very familiar with. Starting all season for Cypress, he had grown used to preparing himself for a game he knows that he will pitch. ?Pitching out of the bullpen, Quezada says, has been a big adjustment for him because of the expectations the team has ?to just get hot quickly?.

Y-D Manager Scott Pickler spends the rest of his year managing the Chargers and was comfortable putting Quezada in a position he knows he can handle.

?I had confidence in him,? Pickler said. ?We were just building him up earlier in the year, he?s a starter.?

Pickler expressed pleasure with Quezada?s ability to get out of the big sixth inning.? While Quezada was dominant for most of his start, the thing Pickler saw as ?great? was his performance in a tight spot.

Quezada mentioned that once he recorded the first strikeout that inning he could settle in and forget about the runners.

?It?s just me and the hitter,? he said with confidence.

Though he mentions the adjustment, the right-hander has gotten added experience operating in tight situations as a reliever which could have prepared him to deliver in that inning.

Connor Kaiser, who doubled and tripled to boost the offense, liked what he saw from Quezada on the mound.

?He seems to always (be focused) when he gets out there,? Kaiser said. ?He was getting that first strike and working from ahead. It?s fun to watch him.?

The defense was a huge boost to Quezada?s outing, making numerous plays to help him escape what could be trouble. Kaiser, who is a leader at the shortstop position, stayed humble and credited his starting pitcher saying that ?there weren?t too many hard-hit balls?.

Quezada seems to have a future in the rotation for a Red Sox team that is getting closer to the playoffs.? His ability to get out of innings and provide a punch to a staff that hasn?t won two in a row since its nine-game streak was snapped is a huge aid for Y-D?s championship hopes.

Though this was just one win, Quezada expects big things for Y-D.

?I think so,? Quezada said of starting another win streak. ?As long as we?re hot going into the playoffs, that?s all that matters.?