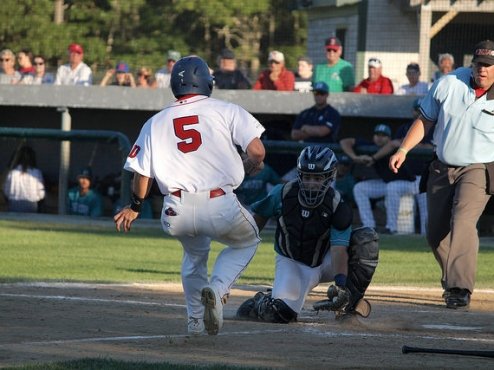 The Red Sox players gingerly walked off the field into the dugout for the final inning of the contest.

“All you need is five runs,? said a young fan adjacent to the Red Sox dugout. ?You always got to be optimistic.?

The team collected no runs in the inning and were stripped of emotion. The optimism that usually accompanies the Y-D dugout wasn?t as noticeable as players packed up their stuff and quickly walked off the field. Manager Scott Pickler led a quiet dugout out to a huddle by third base after the Red Sox watched every last opportunity stripped from beneath them.

“We didn?t really have any scoring opportunities at all through the first five,? Nico Hoerner said. ?It?s the little things that end up making a big difference.?

The Red Sox couldn?t get anything going for it offensively in it?s 5-1 loss to Brewster. ?The Whitecaps starter threw a no hitter into the sixth inning when Hoerner broke it up. Only Christian Koss and Connor Kaiser were amongst the Y-D players who were able to reach base more than once in the contest.

“I don?t think anyone really cared,? Hoerner said of getting no-hit through the first five. ?People care that you aren?t getting hits, but, as far as the no hitter, I don?t think it was a factor.?

Red Sox players were certainly aware of what was being done to them.

Only three runners reached safely in the first five making it difficult to forget the milestone that was occurring. In the sixth inning, after Hoerner recorded the first hit of the game, a Red Sox player can be heard exclaiming, ?Now it?s a yeah-yeah.?

The Red Sox are now 2-3 in the five games since snapping its nine-game, potentially record breaking win streak, unable to string together two consecutive wins in that stretch. ?The offensive struggles are apparent over the skid.

“It?s hard to hit when no one?s getting hits,? Jake Slaughter said. ?To get something going really helps a lot. It kind of goes that way sometimes.?

There was a sense of anxiousness amongst some of the members of the Y-D dugout. Slaughter was visibly frustrated re-entering the dugout after he was pulled from the game for Alfonso Rivas with two people on in the sixth. Just the inning before, he was all smiles after making a diving catch in left to stop the Whitecaps offense. Rivas flew out in the ensuing at-bat.

Hoerner tried to relieve this tension by giving the Red Sox attainable goals. ?Down three in the bottom of the eighth, Hoerner came into the dugout and yelled to his team, ?Let?s get two here.?

“It feels a lot different going into the ninth down one then down three or four,? Hoerner said. ?The attitude of not trying to get it all back in one swing, that?s usually pretty effective.?

The Red Sox, looking to make noise in the playoffs, still stand three points behind Orleans for the first spot in the division. The Firebirds lost, too, on Sunday, which makes it all the more painful for Y-D that it was unable to capitalize.

As it has been for most of the season, Red Sox players remain confident in the team?s ability to bounce back.

“In baseball you get hot and you keep winning. Your game comes around and we lost a couple,? Slaughter said. ?We?ll start winning again.?