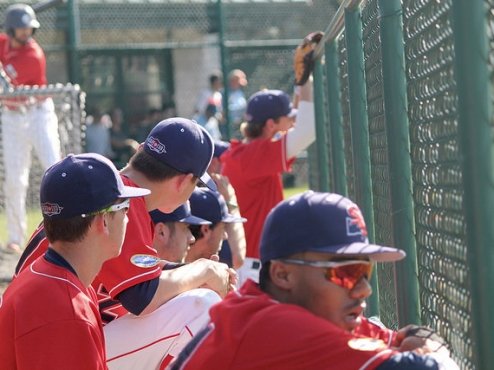 Entering the fourth inning with a lead, John Rooney was comfortably shutting out the Kettlers. He had just gotten his fourth strikeout of the game and a first two innings of luck by way of great plays by the players behind him looked to be all he needed to get through the outing. With two outs, he tried a slider over the plate and the Cotuit player swung hard and took the pitch over the center field fence. ?He took a disappointed stroll off the mound as if to know that Y-D?s fate was about to change.

“It?s heartbreaking,? Rooney said. ?You have to have a short memory. If it?s going to happen you got to learn from your mistakes.?

The Red Sox (6-2-1) had a very solid team start to the game, which was broken up and then some following the Cotuit home run in its 9-2 loss at Lowell Park. John Rooney who looked like he was on his way to a great outing, threw two regrettable pitches all game which lead to Cotuit starting to pull away from Y-D after he was pulled.

“A couple of stupid mistakes, stupid pitches with two strikes,? Rooney said. ?He made me pay for it. ?I had him.?

He said that his control was a bit off as well. ?He hit a few batters and allowed a few guys on by walks, which gave Cotuit baserunners for when he made mistakes.

Pitcher Tommy Henry came on in relief later on in the game. ?With a jolt of momentum from a previous couple of innings, Cotuit continued its hot hitting and smacked a few around off of pitches by Henry.

“It just comes with the territory I guess,? Henry said. ?As a pitcher, you know that if you make one mistake they could capitalize on it and it could change the game.?

The Red Sox were victim to that on Saturday, as a string of mistakes proved deadly for a team that struggled to score the ball. ?The two runs the team scored were off of a walk with the bases loaded and a sac-fly to center.

Entering the eighth inning of play, the Red Sox were down 8-2, which gave reminders to players of their screaming comeback just a few games earlier. ?Rooney added that he is never counting this team out and nothing should be looked as a loss of momentum. ?But, the Red Sox made two quick outs and history wasn?t ready to repeat it?s self just yet.

“I thought I pitched better when (Cotuit wasn?t) getting the hits I was getting lucky with,? Rooney said. ??I?m not disappointed, there?s still a lot of baseball left.?

Only nine games into the season, he may be right.