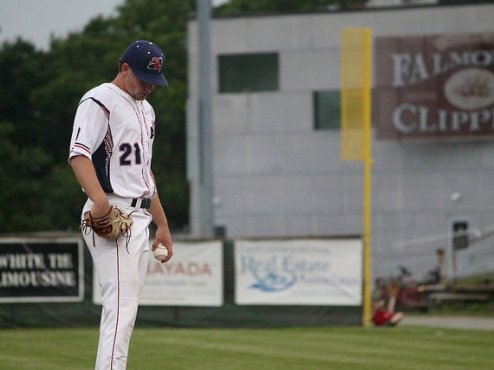 Falmouth, MA? Spencer Van Scoyoc was barely being touched. ?With a few strikeouts on the day already, the field had been able to stay relatively relaxed. ?With a man on first, Van Scoyoc fired a pitch and the Falmouth batter roped the ball right up the middle. ?The swing was strong, the hit was powerful, and it looked like a single right off the bat. ?Less than a second later, the quick glove of Van Scoyoc snagged the line drive out of the air and threw the man out at first.

Van Scoyoc was in an odd groove. ?When Falmouth smacked the ball the hardest, he was able to force the most outs.

“Most of those are just reactions,? Van Scoyoc said. ??You just react to the ball and it finds the glove.?

Van Scoyoc was dominant in Friday?s 5-1 win over Falmouth. ?Falmouth hitters could not catch up to him despite a relatively low average velocity. ?He allowed one earned run in his over five innings of work and helped the Red Sox to their third straight win.

“Movement on my fastball was good,? Van Scoyoc said. ?It was moving enough today that they weren?t squaring it up. Once I started controlling the curveball it made things a lot easier.?

His fastball was clocked between 83-85 miles per hour on Friday. ?That is relatively low in comparison to other pitchers on the Cape who average in the high eighties and low nineties on their fastball. ?He noted that movement on that pitch is something he has relied on due to the low velocity and that it was working very well against Falmouth.

While most of his three hits allowed came in the later part of his outing, Falmouth?s hitters did not find a way to catch up to Van Scoyoc. ?He went the distance and never lost his command, registering only one walk in the game. His one earned run came after he was pulled in the sixth, after a runner he let on scored while Troy Terzi, who had a great game of his own, was in relief.

“He did what we expect him to do,? Terzi said. ?He was mixing it up real well, he?s got an electric offspeed.?

In Terzi?s relief appearance, he went 3.1 innings, shutting out Falmouth and closing out the game. ?His performance was in a way overshadowed by Van Scoyoc, as he was dominant and nearly untouchable, striking out five in his short time on the mound.

Manager Scott Pickler seemed thankful after the game for Terzi and Van Scoyoc?s ability to go the whole game. ?He mentioned that they had blown up the bullpen a bit the other night, therefore the performance of both pitchers ?saved? them for the future.

For Pickler, the strengths he saw from Van Scoyoc started with his command. ?He noticed that he was able to throw the ball over the plate the whole game which, in turn, led to few walks and an increase in mistakes from Falmouth?s hitters.

“He had his fastball and curveball working,? Pickler said. ?He was very good. When we needed it he spotted up for us.?

This was Van Scoyoc?s first start for Y-D and just his second appearance. In his previous outing, he struck out the lone batter he faced which acted in foreshadowing his performance on Friday.

Van Scoyoc?s game adds a nice outing to his Cape resum?, but it does not seem like he is done yet.

On Friday, he got there and he?s only getting started.