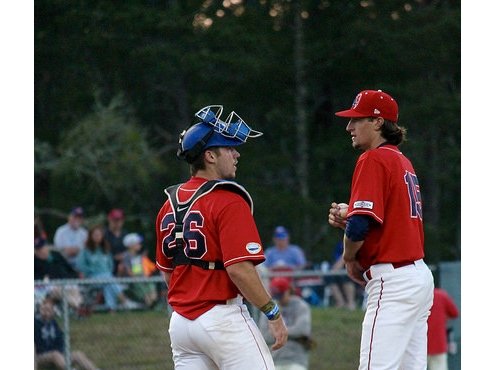 The Red Sox had seen a situation like this before. ?The crack of the bat and the ball traveling way over the fence off of a pitch from Tim Brennan. ?He took a stroll as he watched the Harwich?s Matt Vierling round the bases. ?Usually, this marks a turning point or loss of momentum for Y-D, but Wednesday was different.

“If we?re scoring runs, we?re still probably going to win the game,? Brennan said. ??We gave up the one solo home run, but that doesn?t matter, you just got to keep attacking.?

Brennan was nearly flawless in Wednesday?s 12-1 win over Harwich. ?One swing of the bat kept him from a shutout performance, but Harwich didn?t threaten much at all the entire game. ?The resounding win was something that Y-D needed after being a loser of two straight.

This marked Brennan?s best outing of the season. ?He went seven strong innings, allowing just four hits and walking none. ?He had season highs in strikeouts and innings, as well as season lows in Hits and earned runs while picking up his first win of the season.

He has only walked two batters in 16.1 innings this season and hasn?t allowed a free base since his opening day starts on June 14. He said one of the keys to the game was his ability to throw strikes and let the field handle everything behind him.

“He had complete command of three pitches, he threw strikes and filled it up,? Manager Scott Pickler said. ?Just go after hitters, that was one of the best outings he?s had all year.?

Harwich ranks last in the Cape League with a .213 batting average. ?Comparatively, Y-D ranks second in the league in opposing batting average for pitchers. ?They only have allowed their opponents to hit a measly .231 against them.

Holding a commanding lead most of the game, Pickler still chose to be on the attack with his calls throughout the game. ?Even when Brennan gave up a hit, Pickler continued to make similar calls to attack the strike zone.

“We threw thirteen straight changeups in the sixth and seventh inning,? Brennan said. ?Early on it was the fastball and then we got three or for on changeups, everything was working.?

Cather Kole Cottam was behind the dish for the second straight game on Wednesday. ?He liked what he saw from Brennan in the game.

Brennan showed appreciation with Cottam?s vocal nature when behind the plate and said that it helps him get through the outing. ?In the fourth, following just one of the few times Brennan allowed a hit all game, Cottam met him at the mound. ?What the catcher said could be the thing that prolonged Brennan?s dominance.

“I just said trust your stuff and, no matter what, keep attacking,? Cottam said. ?That?s what?s gotten us this far and it was going to get us through the rest of the game.?

Following the game, it was all smiles from the pitcher-catcher tandem.

“He?s not that good,? Cottam joked of Brennan.

On Wednesday, he was.