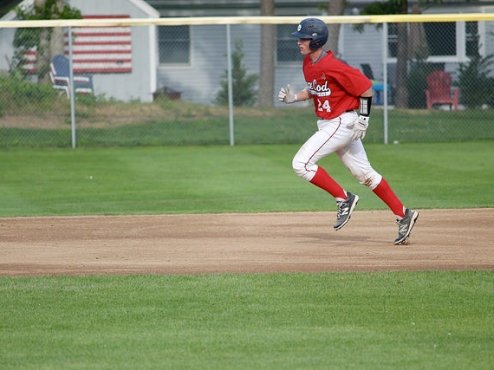 Darren Trainor set in the box for his first at bat of the game. The Chatham pitchers were making quick work of the Y-D offense, perfect through 2.2 innings. ?Just three days earlier at Veteran?s field, Trainor took one high over the foul left field foul pole that the umpires on call said tailed out of play. ?With that in mind, Trainor drilled the first pitch he saw to the deepest part of the field and in the trees. The nine hitter for the Red Sox, his surge looked to be the play that jump-starts the stagnant Y-D offense. It was not.

The Red Sox offense struggled to score runs at Chatham. ?The team collected seven hits, but could not string them together and turn them into anything more than the two runs it scored. Only Christian Koss could work a walk in the game, giving the Red Sox just eight baserunners all game.

“You can?t keep that going all year,? Manager Scott Pickler said of the explosive performances over the nine-game winning streak. ?It?s just a matter of us getting back on track.?

The loss moves Y-D three points out of first place in the eastern division. ?Despite owning the best winning streak of the season, a streak that Y-D staff has said is ?the most we?ve ever seen? from the Red Sox team, Orleans? consistent play has kept them second in the race for a while.

Even in the 4-2 win at Orleans on Thursday, the offense showed little life for most of the game leading up to Quintana?s home run. Nico Hoerner sees the similarities in the two games.

“I don?t think we played any worse than we played last night,? Hoerner said. ?It?s just a few hits here in there. We had some chances early on, we just missed them.?

Hoerner noted that he ?likes their chances? going into late moments of the game in which the team trails. The Red Sox have a history of come from behind victories. In the ninth inning of a game against Orleans at ?Red? Wilson Field, Alfonso Rivas delivered a game winning single capping off a three run bottom of the inning. In a June 21st matchup, also at home, against Chatham, the Red Sox put up a nine-spot in the eighth inning to overcome what was then a six-run deficit.

Hoerner added that he?d prefer not to always be in those types of situations, but is confident in the team?s ability to over come adversity in those late innings. But, the Red Sox couldn?t pull through on Friday. Before the bottom of the ninth inning, Hoerner addressed his team.

“Let?s get some baserunners,? he said removing his hat and glove to get into batting gear, something he does whenever Y-D trails, no matter if he is due up or not. ?Come on, let?s make it happen.?

Y-D couldn?t make it happen as they went down in order. ?They were hopeless at the plate as the final three outs contained two straight strikeouts to end the game.

Spencer Van Scoyoc started out the game for the Red Sox and surrendered three runs in the third inning, which the Y-D team could not recover from. It trailed the whole game and was never given a spark.

Hoerner said that seven hits, while ?not great? is ?better than nothing? and feels that the Red Sox hit enough balls hard all over the field that there are positives to take away from the game.

Trainor, who hit the Home run Friday as well as the bomb on Tuesday, acknowledged it?s funny that only Chatham has seen his power hitting abilities. He sees himself as someone who just tries to ?hit the ball hard?. Pickler added that the adjustments Trainor?s been making at the plate have led to this success, noting he ?didn?t expect him to hit the ball that far? but sees improvement.

Some Y-D faithful have said the Red Sox got hot too early and worried it might cool down by playoff time. ?This stretch of three games, gives Y-D plenty of time to catch fire again for the playoffs, but the Y-D team and Trainor don?t feel that any sort of slump is ?necessary?.

“We want to win every game,? Trainor said. ?You?re playing every day, the beauty of it is we get to play tomorrow. We just got to flush it.?