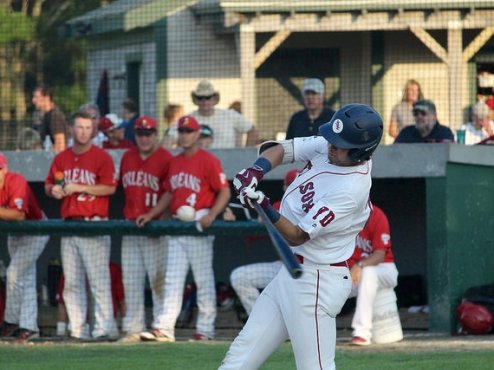 “Never,? Mendoza said of hitting a grand slam in the first inning. ?I don?t think I (hit) one this year, it?s been a while.?

Mendoza?s first inning bomb marked his first four RBIs and the first run he scored on the year. ?It was the start of a five run inning that Y-D (19-11-1) never looked back from, hanging eleven runs on the eastern division?s first place team, Orleans. Y-D?s eruption is responsible for the Firebirds most lopsided loss of the year.

“It?s just a matter of time,? Mendoza said. ?We?re just waiting for our time to explode and I guess now will be that time.?

The win at ?Red? Wilson Field is a huge one for Y-D. It brings the Red Sox within three points of Orleans for the first spot in the eastern division. ?Mendoza noted that Y-D is an ?end of the year team? as they had shown in each of the past three seasons in which they?ve captured consecutive titles.

On July 19th of last season, the Red Sox captured its 20th victory, which puts the team this year right on pace with its most recent championship team. The Red Sox captured the two-seed in last year?s Cape Cod Baseball League playoffs, finishing a game and a half behind the Harwich Mariners for the top spot.

Prior to the game on Wednesday, Orleans had a +62 run differential, way above the Red Sox who were second in the division with just a +9. This is in part to Orleans? stellar pitching and overpowering offense, neither of which Y-D let affect it in the game.

“Who doesn?t like an 11-2 win,? Carlos Cortes asked smiling. ?Hits are contagious. Twelve hits, you can?t complain about that.?

Cortes collected three hits in the game for the Red Sox. He raised his average to .317 which is first on the Red Sox team by players with at least 100 at bats.

The whole Y-D team was cooking offensively. Carter Pharis, who has only taken 54 at bats despite being with the team the length of the season, contributed two RBIs of his own.

Pickler went on to say that ?you only have to win by one? in regards to Y-D?s offensive outburst. That has a lasting meaning for the Red Sox which has won six of its last seven, with four of those wins coming by just one run. ?The nine run victory is the first time Y-D has won a game by more than two runs since July 10th.

Y-D players have said to love the extended baseball they?ve played in each of the last two games, but Cortes is relieved to finally win an easy one.

“It?s relaxing,? Cortes laughed of the going ahead big in the first. ?It?s not if we score we win or if they score they win. It?s nice we?re (finally) not stressing at the end of a game.?