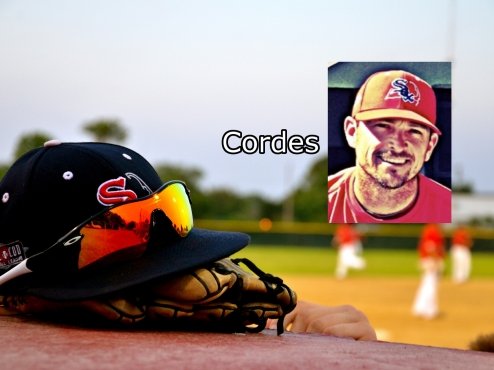 SOUTH YARMOUTH, Mass. ? James Cordes will return to the Yarmouth-Dennis Red Sox as an assistant coach in 2015, as announced today by Y-D and manager Scott Pickler.

In his previous stint with the Red Sox, Cordes helped tutor Y-D to a runner-up finish in the 2012 Cape Cod Baseball League Championship as well as an appearance in the Eastern Division Semifinals in 2013.

A native of Sun Valley, Idaho, Cordes played shortstop for four years at the University of Redlands (Calif.), majoring in history while playing with the Bulldogs. After finishing his undergraduate career, he moved into coaching. Cordes previously served as an assistant at UMass Boston from 2007 to 2008 and has held the same role with the Los Angeles Angels? Elite Scout Team since 2010. Additionally, he formerly aided the baseball program at Redlands East Valley (Calif.) High School, taking the reins of the Wildcats in 2008 and sitting at the helm since then.

Entering 2015, Cordes has compiled an overall record of 126-41-1 with REV and a 71-17 mark in Citrus Belt League play. In that timespan, he has guided the Wildcats to four CBL Championships.

A four-time CBL Coach of the Year, Cordes is proud of the REV players he has coached who have been drafted by Major League Baseball, and many more who have gone on to collegiate baseball careers in California and other states.

Cordes earned his Bachelor?s degree in 2004 from Redlands and later earned his Master?s in English at Boston College in 2008.