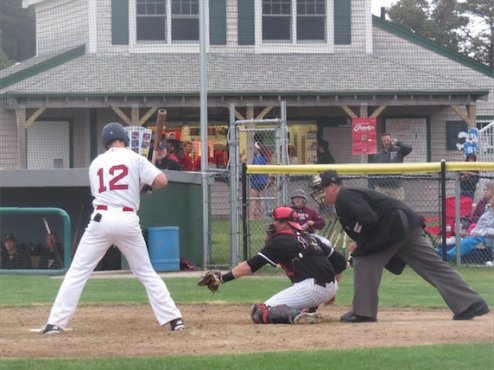 Yarmouth-Dennis Red Sox fans were optimistic after a 1-0 lead in the top of the third inning, against the Cotuit Kettleers on Saturday night. Y-D?s A.J. Simcox (Tennessee) was brought in by Donnie Walton?s (Oklahoma State) sacrifice fly for the Red Sox first lead of the season in the top of the third. But a costly error in the bottom of the fourth inning gave the Kettleers a 2-1 lead and eventual victory.

Michael Murray (Florida Gulf Coast) had a solid first outing for the Red Sox as he allowed two runs, only one being an earned run. Murray allowed just two hits and two walks.? Nick Kozolowski (Hofstra) made his second appearance of the season coming in for Murray in the sixth inning.? Kozolowski had three, strong 1, 2, 3 innings, allowing no hits.

The bottom of the fourth inning brought some drama as the Kettleers had two runners on base. Jake Fincher (North Carolina State) attempted to steal third base but Goldstein?s throw to third got Fincher just in time, for the 1st out. Murray then went on to hit Logan Taylor (Texas A&M) with a pitch, bringing Y-D right back to the jam that they were in before.

As Murray tried to work his way out of a jam, he stopped in the middle of his rotation and a balk was called.? The umpires advanced the Kettleer runners, but soon after reversed their call because ?time? had been called, therefore being the explanation as to why Murray had stopped.? Cotuit coach Mike Roberts then protested the game after the balk call on Murray was reversed. Y-D could not complete a double play, allowing third base runner DC Arendas (South Carolina) to score and tie the game 1-1.? ?

Soon after, Y-D committed a throwing error allowing Jameson Fisher (Southeastern Louisiana) to give Cotuit the 2-1 lead. The Red Sox struggled to bring in runs for the rest of the game, as they left a total of seven runners on base.

In the ninth inning, Y-D found itself with one runner on second base trailing by one. Unable to bring the runner home, the Red Sox fell one run short of the Kettleers.

The Red Sox hope to bring alive their offense and achieve their first win of the 2014 season Sunday June 15, 2014 when they host the Wareham Gatemen (1-2) for a doubleheader. The first game is at 2:00pm and the second game is at 5:00pm.