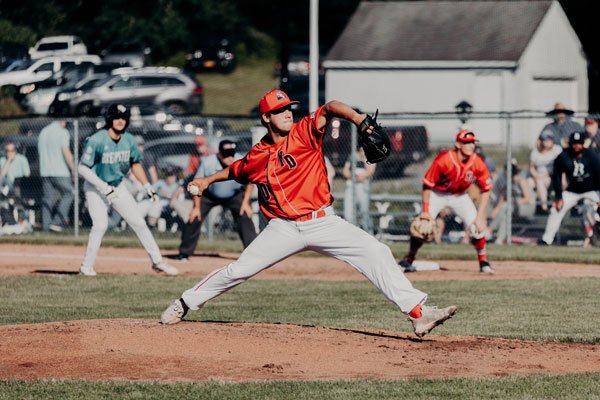 Despite eight hits in the first six innings, the Yarmouth-Dennis Red Sox failed to scratch a run across all game at Stony Brook Field Monday night, falling to the Brewster Whitecaps, 3-0, for Y-D’s first loss of the summer.

Northeastern’s Eric Yost started the day on the mound for the Red Sox, making his first appearance of his second summer with Y-D.

With one out, Alex Freeland lined a single to right and advanced to third after an error from Hunter Haas at shortstop for Y-D. Yost got the next batter to pop out, but Grayson Tatrow’s infield hit drove Freeland home for the game’s first run.

The Whitecaps added another in the third, with Brennan Milone slugging a two-out homer to dead center. Then after another two-out extra base hit from Logan Bravo, a dropped third strike allowed Bravo to score all the way from second as Y-D’s Simon Reid threw down to first.

The three runs were all Brewster would get — Yost added a shutout inning in the fourth to finish his day with three runs allowed, but just one earned. He also struck out five and walked none.

After Yost departed the mound in the fourth, Bryce Robison (1 IP, 2 K), Matt Kavanaugh (1 IP, 2K), and Shaun Gamelin (2 IP, 2 K) came in from the bullpen in succession to shut down the Brewster lineup.

Unfortunately for Y-D, the Red Sox couldn’t put enough together offensively to get back into the game. They had a great chance in the sixth with the bases loaded, but Caden Connor struck out to end the inning. Overall, the Red Sox left 10 runners on base.

“I thought we played really flat,” Y-D field manager Scott Pickler. “We had key situations where everyone was trying to do too much.”

Brewster’s Brian Fitzpatrick pitched four shutout innings, then gave way to the bullpen. John West pitched the next four frames without allowing a run to earn the win, then Dale Stanavich shut the door with a 1-2-3 ninth inning, earning his first save of the season.

The Red Sox are back in action Tuesday for the home opener at Red Wilson Field. Y-D faces Brewster, with first pitch at 5 p.m. Pickler said he and the team are “excited to be home”.