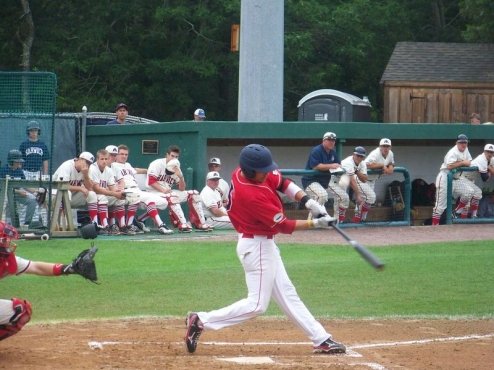 The Yarmouth-Dennis Red Sox went on the road to take on the Harwich Mariners and try to extend a two-game win streak. The Mariners have come out on top in the teams? two previous meetings. Despite this, the Sox would come out on top with a 4-0 win.

Starting for the Mariners was Aaron Bummer (L, 2-1) who also started in Y-D?s first lost to the team. Bummer pitched 7.0 innings and allowed three hits on six hits. He also walked one batter and struck out two.

Bummer?s effort was not enough though. After a pair of singles from Y-D, he walked a batter and hit another. He also threw a wild pitch which led to two runs scoring.

Starting on the mound for the Sox was Clay Smith (W, 1-1) pitched 7.0 innings and allowed five hits and struck out three. Smith has appeared four times for the Sox and has an ERA of 3.60 in 15 innings pitched. Smith stood out in the game for working his way through tough situations and not allowing any runs to score.

Also key players in the game, were Auston Bousfield, D.J. Stewart and Cole Peragine. Bousfield went two for four with one RBI as his batting average continues to improve to .233. Bousfield singled in the top of the ninth bringing Brandon Downes in to score, sealing the deal for the Sox. Stewart went one for three in the game and recorded one RBI as well as scoring a run. He has stood out since joining the Sox with a .353 batting average. Peragine went two for four and scored one run. Peragine is hitting .258 for the Sox and has struggled at the plate, but improvements could be seen at Harwich.

Kerski Kody pitched one inning, striking out two batters and allowing one hit. This was Kody?s second appearance. Sam Coonrod (1-0) took the mound to close out the game, showing his ability to work out of the bullpen. Coonrod consistently hit low to mid 90s on the radar and has been working to improve his ERA after letting up four runs to Orleans earlier in the season. His opponents have a batting average of .219 and he has been a force to reckon with since entering games from the bullpen.