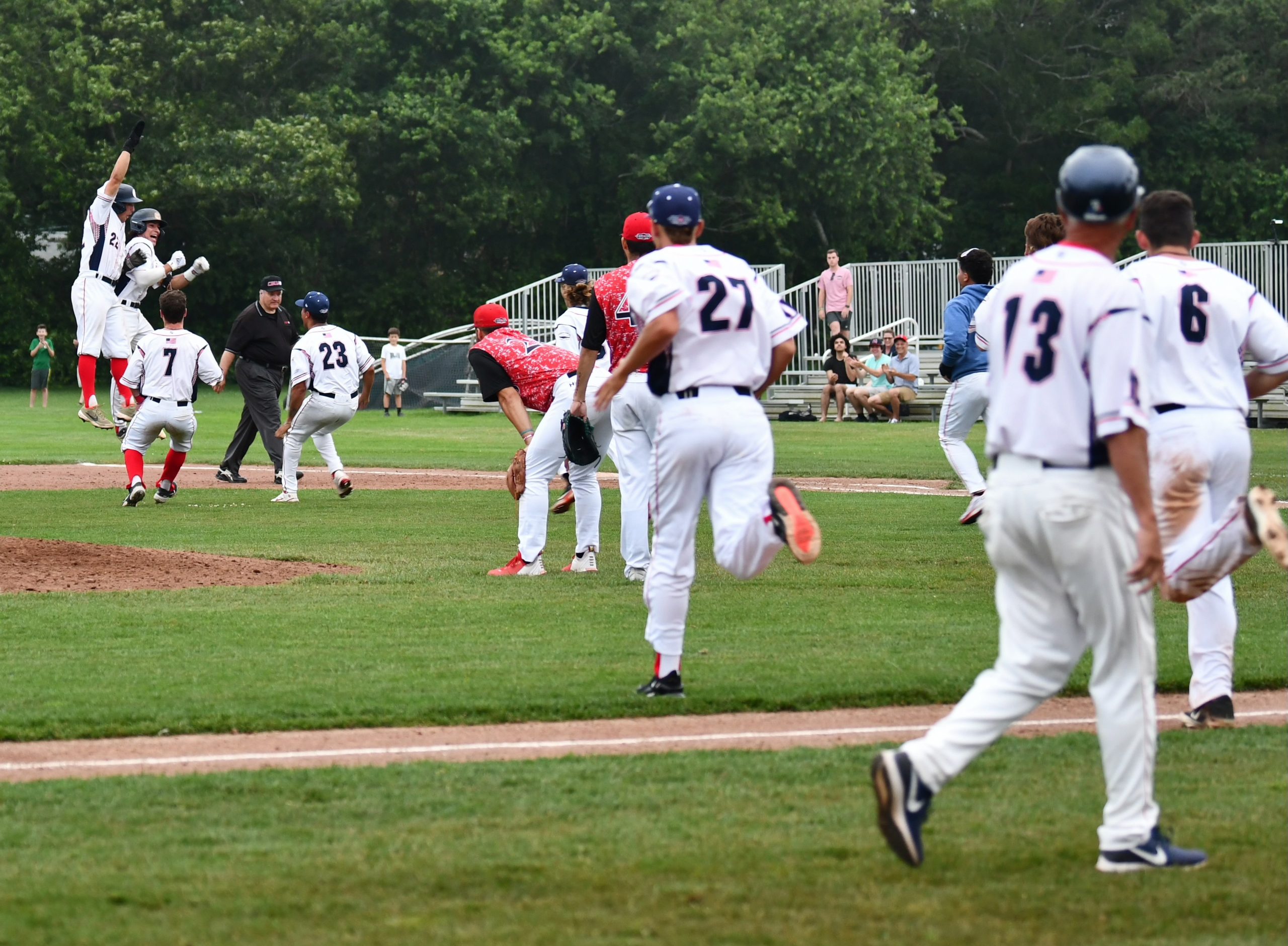 YARMOUTH– The Yarmouth-Dennis Red Sox gained back some momentum Saturday night at Red Wilson Field as they won a back-and-forth thriller that ended with a controversial final play. USA Baseball National Collegiate Team selection Brooks Lee (Cal Poly San Luis Obispo) led the way with a 2-for-4 performance, including a walk and a three-run home run  — giving him a team-high .391 batting average. Cade Hunter (Virginia Tech) also had a multi-hit performance, contributing a 2-for-3 performance at the plate with a walk.

Coach Pickler had nothing but positive things to say about his team after the win.

“I thought Gallagher had a great game. He was really good, really good. He pitched outstanding. I don’t usually say that when a guy gives up seven runs, but he was outstanding, you know. You know we got some big hits. They are finally getting more comfortable with the wood bat and everything else. You know we’re down twice and hit the three homerun and chipped away until the end. It was pretty special I got a good group of guys…” Said Coach Pickler after the walk off win.

On the mound, Patrick Gallagher (Connecticut) and Jaret Godman (Oklahoma) each held their own. Through five innings, Gallagher scattered eight hits, seven runs, and struck out eight batters. Godman let up three hits and struck out two batters in four innings of work.

The Red Sox wasted no time, getting their first run across in the bottom of the first inning when Peyton Graham (Oklahoma) was hit by a pitch and then came around to score on a wild pitch. Sloppy defense, a well-executed suicide squeeze, and a two-out single gave Orleans a 3-1 lead in the top of the third inning.The Red Sox responded with a base hit by Tanner Smith (Oregon), a walk by Briley Knight (Portland), and a three-run bomb off the bat of Lee — giving Y-D the 4-3 advantage.

Trailing 7-5 going into the bottom of the sixth inning, Y-D showed fight when Nathan Baez (Arizona State) ripped a double into the gap to score Chase Luttrell (Long Beach State), who walked.

Smith led off the bottom of the ninth inning with a walk, followed by Graham who was hit by a pitch. With runners on first and second and no outs, Knight laid down the perfect sac bunt to advance the runners. Lee was intentionally walked before Luttrell hit a sac fly to center field to tie the game. In the final at-bat of the game, Baez hit a dribbler to third base that the Orleans infielder made an excellent play on, barehanding it and chucking a bullet over to first to beat the speedy Baez. However, the throw was just slightly offline, forcing the Orleans first baseman to attempt to tag Baez out. The collision knocked the ball out of the first baseman’s glove, resulting in the walkoff for the Red Sox.

The 3-2-1 Red Sox will travel to Orleans tomorrow to take on the Firebirds once again. Luis Ramirez (Long Beach State) will get the start.

1 thought on “Yarmouth-Dennis Walks It Off Vs Orleans”