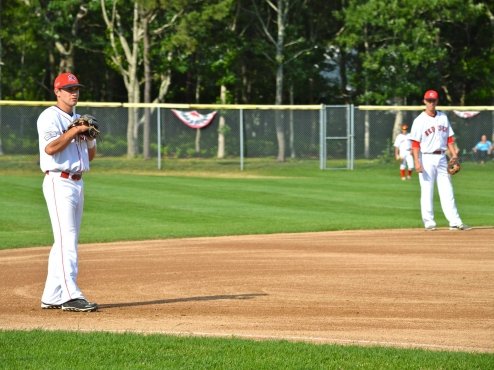 The Red Sox lineup was as balanced as it has been all season in the win. Eight of the nine hitters recorded a hit, and six different players scored at least one run in the ballgame. The Red Sox got on the board first after a two-out RBI double by Jason Goldstein (Illinois) scored Josh Lester (Missouri). After a two-run third inning and one-run fourth inning gave the Harbor Hawks a 3-1 lead, the Red Sox battled back and scored four runs in the fourth to retake the lead. Catcher Jesse Jenner (San Diego), shortstop Nico Giarratano (San Francisco) and third baseman Jordan Tarsovich (VMI) all had RBI singles in the inning.

After Hyannis scored a run in the fifth to trim Y-D?s lead to 5-4, a four run seventh inning gave the Red Sox just enough breathing room to get the win. Josh Lester (Missouri) and Jenner both forced bases loaded walks in the inning to put the Sox up 7-4. Giarratano gave the Red Sox two more insurance runs when he doubled with the bases loaded to score Lester and Donnie Walton (Oklahoma State).

The Harbor Hawks did make the game interesting despite the 9-4 deficit. Home runs by Danny Kihle (Wichita State) and Carl Wise (College of Charleston) in the eighth inning cut the lead to 9-7. The Red Sox tacked on an important run in the bottom of the eighth to make the score 10-7 heading into the ninth inning. Y-D pitcher Dimitri Kourtis (Mercer) closed the game out, despite allowing a pinch-hit RBI single to Bobby Melley (UConn).

Manager Scott Pickler used four pitchers in the game, and they did just enough to help the Red Sox get the victory. Starter Josh Staumont (Azusa Pacific) allowed no hits in two and two-thirds innings, but he did walk four batters and surrendered two runs. Parker Bugg (LSU) and Zac Favre (UCF) both pitched solid during the middle innings to never let the Sox fall behind, and Bugg was awarded the win for his efforts. Kourtis got his second save of the season in one and a third innings pitched.

The Red Sox moved to (11-12) on the year with the win, and the Harbor Hawks fell to (10-13) after the loss. Y-D hopes to win their third straight game when they travel to Eldredge Park on Tuesday, July 8th to take on the Orleans Firebirds (14-9). First pitch is set for 7:00pm.