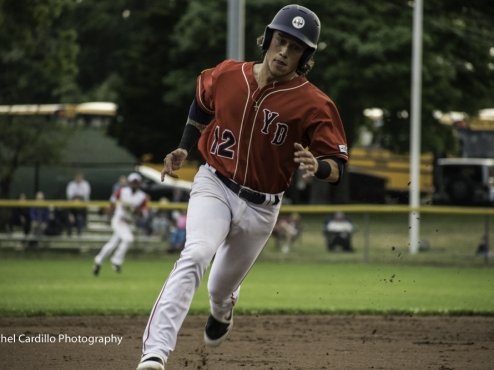 The Yarmouth-Dennis Red Sox dropped a heartbreaker by a score of 5-4 at Eldredge Field in Orleans on Thursday night. There were ample opportunities for the Red Sox to snatch the victory but their comeback bid fell just short.

In the ninth inning, Eastern Illinois second baseman Jimmy Govern led off with a walk. Representing the tying run, Govern successfully stole second and then, on a 3-0 count, was picked off attempting to steal third by Orleans righty Shay Smiddy (Louisville). Manager Scott Pickler, who is known for keeping his players honest, voiced his displeasure with Govern on the field before the ninth inning ended.

After the game, Coach Pickler was still dissatisfied with Govern?s baserunning.

?He went on his own,? said Pickler, clearly unhappy with his second baseman?s decision-making late.

To make matters worse, the next two hitters, Grand Canyon State outfielder Quin Cotton and Arizona catcher/first baseman Matt Dyer, both reached base. Instead of bases loaded with nobody out, the Red Sox had to settle for having the tying run an extra 90 feet away. The threat was not completely nullified by the pickoff, just diminished.

After three consecutive walks from Smiddy, Orleans Manager Kelly Nicholson brought in Aaron Ochsenbein (Eastern Kentucky) to try to put out the fire. That he did, inducing a pop out from Y-D catcher/outfielder Adam Kerner (San Diego), and then retiring third baseman Nick Quintana (Arizona) via strikeout to end the game.

After a stellar sophomore season that saw him earn All-Conference honors in the Pac-12 thanks to a .313 batting average and 14 homers, the Arizona third baseman came to the Cape with lofty expectations. The 20-year-old did pick up his first two hits of the season on Thursday night, but has also struck out twice in each of the first three Y-D games.

The bullpen was stellar for the second consecutive game, throwing 5.1 innings of one-run ball. Justin Friedman (San Diego), William Frank (Canisius), and Chandler Fidel (Arkansas?Little Rock), all of whom had not pitched on the Cape yet this year, did the heavy lifting out of the Y-D bullpen today. Alec Marsh (Arizona State) and Sam Kessler (West Virginia) were both unavailable out of the bullpen.

Quin Cotton and Matt Dyer, who hit out of the three and four holes, respectively, on Thursday, have gotten off to hot starts on the Cape. Cotton is 5-12 with 3 RBI, one of which came in tonight?s third inning on a single to score Zach Ashford (Fresno State). The Grand Canyon State product is riding a three-game hitting streak.

Dyer, who had the game-winning hit in Tuesday?s walk-off win, is 4-8 with more walks (three) than strikeouts (one) in three games. He also has two doubles and two RBI. He has reached base safely in all three games this year and has an on-base percentage of .636.

Chandler Fidel inducing a pop out from Brandon White to end the eighth inning. With a 5-4 lead, the Firebirds had runners on second and third with one out and were threatening to extend the lead. Fidel got a ground-out from Ricky Martinez and a pop-out from White to end the inning and give the Sox a chance to come back in the ninth.

The Red Sox (1-1-1) will look to get back into the win column on Friday night against the Harwich Mariners (1-2). First pitch is scheduled for 6:30 p.m. at Whitehouse Field in Harwich.