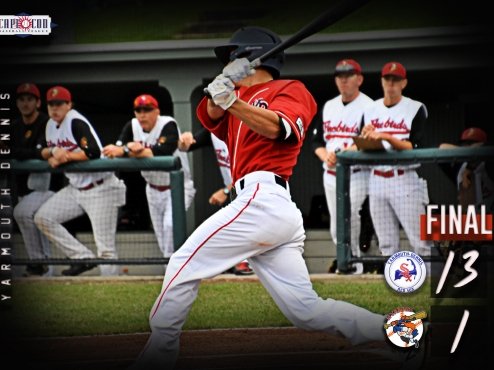 HYANNIS ? The Red Sox seem to be getting back into a groove as they won their second game in a row, 13-1. From the very start until the end of the game they had the Harbor Hawks? number, as they took an early lead and ran away with the win.

After Wyatt Young (Pepperdine) and Noah Campbell (South Carolina) got on base with no one out in the first inning, Austin Wells (Arizona) had a prime opportunity to give the Red Sox a nice head start. He did just that, blasting a three-run shot over the fence in right-centerfield. That was Wells? league leading fifth dinger of the summer, two ahead of everyone else on the Cape.

Y-D didn?t strike again until the fourth inning, while also proceeding to score in every inning for the rest of the game. Tate Samuelson (Cal Poly) took a pitch off of the head area to leadoff the fourth, it appeared he was hit in the eye. Although it was a scare and caused him to exit the game, it seems as if he?ll be okay. Riley Tirotta (Dayton) pinch ran for Samuelson, and eventually scored on a wild pitch.

Jack-Thomas Wold (UNLV) hit a sacrifice fly in the fifth which allowed Wells to tag up and score. Both R.J. Yeager (Mercer) and Young had RBI hits in the following inning to extend the lead to 7-0. With the base knock, Young now has a six game hitting streak going for himself. It didn?t stop there, as Brad Beesley (Cal Poly) hit a two-run double in the seventh.

A terrifying moment occurred in the eighth when Wells hit a scorching line drive straight back up the middle. Kyle Whitten (Virginia) was on the mound for Hyannis and took the liner off of his head. Both the audience and the players in the field/dugouts went completely silent while Whitten fell to the ground. After several minutes of being helped by the trainers, he thankfully was able to sit up on his own and eventually was helped off the field. Whitten left in an ambulance and will hopefully be able to quickly recover from the nerve-racking injury.

Noah Cardenas (UCLA) was hit by a pitch later on in the inning with the bases loaded, which earned him an RBI; same for Jake Palmer (UC Irvine) who reached base on a walk. Yeager continued swinging his hot bat and drove in yet another run with a base hit.

Even with a 12-1 lead, perhaps the most exciting part of the game came in the top of the ninth. Erik Tolman (Arizona State) battled in a 10-pitch at bat and ended up hitting a towering home run off of the scoreboard in right field. When asked about the plate appearance, Tolman said, ?I came up, it was a new pitcher in, a lefty ? so he had the better matchup. I just looked for a first pitch fastball and he got ahead. I got two strikes and only thing going through my head is just battle. I knew he was going to throw a curveball sometime and I just sat on it and barreled it up pretty well.? He sure did ?barrel it up,? as the solo shot was a no doubter the second it left his bat.

Jack Leftwich (Florida) was the starting pitcher for the Red Sox and had about as good a performance as you could?ve asked for. He gave up two hits while striking out five batters over five scoreless innings of work. Jacob Winger (High Point) entered the game in the sixth, and although an unearned run crossed the plate on his watch, he had a great outing. Over 2.2 innings, he gave up just one hit and struck out four. Brady Corrigan (Arizona State) came in with two outs in the eighth and it was four up, four down.

Not only does Wells sit atop the home run leader board, he?s now also tied for first in the league in runs batted in with 15. Wyatt Young is all by himself in the league lead average, batting an impressive .378. With the win, Y-D is tied with Chatham for second in the East Division standings, trailing Orleans by just one point.

The Red Sox will now play host to Hyannis at 5:00 P.M. at Red Wilson Field tomorrow on Independence Day.