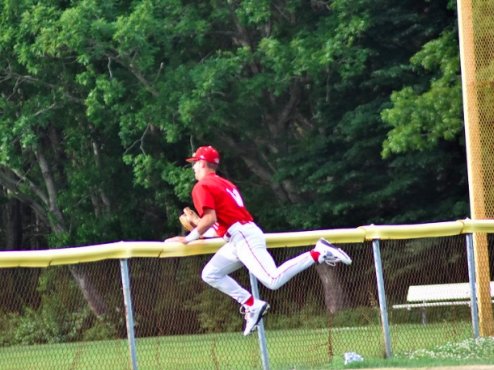 YARMOUTH ? The Harwich Mariners arrived at Red Wilson Field Friday night winners in five of their last six behind the league?s best ERA, and only allowing more than five runs in a game once this season.

That all changed in the fourth inning though, as the Yarmouth-Dennis Red Sox tagged Mariners pitchers for eight runs on just two hits.

Xzavion Curry (Georgia Tech) got the start for Harwich and was solid through three, but things took a turn for the worst to begin the home half of the fourth. He lost his command and issued three consecutive walks to begin the inning. Luke Waddell, a teammate of Curry?s at Georgia Tech, put the Red Sox on the board with an RBI single that tied the game at one.

After inducing an RBI groundout from Zach Ashford (Fresno State) for the first out of the inning, Curry was pulled in favor of Austin Wood (Stetson). That?s when things really unraveled for the Mariners.

The first batter he faced, Christian Koss (UC Irvine), laid down a sacrifice bunt right to Wood, but he misplayed the ball and was unable to throw Koss out at first. He then hit Andrew Daschbach (Stanford) with a pitch to load the bases and walked Reese Albert for the fourth Y-D run of the inning.

The next batter, Noah Campbell (South Carolina) was hit by a pitch, as was Jonny DeLuca (Oregon), who led off the inning. Nick Quintana (Arizona) hit a grounder back at Wood to bring home the seventh run of the inning and end Wood?s night. He allowed four runs, three earned, without recording an out.

Tom Sutera (Siena) came on in relief of Wood, and his wild pitch scored Campbell for the eighth and final run of the inning. Y-D would tack on two more runs in both the fifth and sixth innings, but they simply weren?t needed, as the Red Sox pitching staff was brilliant yet again.

Jensen Elliot (Oklahoma State) was terrific in his second start of the season, working around traffic on the base paths en route to allowing just the single Harwich run. Trenton Denholm (UC Irvine) and Tyler Madrigal (St Marys) shut down the Mariners, who couldn?t muster a single hit for the remaining 3.1 innings of the ballgame.

Koss and Quintana, along with newcomer Waddell, led Y-D with two hits on the evening. Koss led the team in batting average last season, but some advice from Coach Pickler in pregame batting practice has really gotten him going.

?Coach Pickler has really helped me relax at the plate,? said Koss after the game. ?I was kind of getting out of myself, so I just went back to simplifying things at the plate. I?ve been staying short with my swing, and its been working out for me.?

In addition to his work at the plate, Koss made a couple of highlight reel plays out at shortstop. Two of those were diving stops on groundballs up the middle, and the other was an over the shoulder catch out in short left field.

?I love playing defense. Anytime you can make a play, especially get a team energized, it?s a great feeling,? said Koss. ?I didn?t even have the best catch of the day. Reese out in left field made an incredible play on that ball out in left.?

Albert made an unbelievable grab on a foul ball off the bat of Chris Galland (Boston College) in the third. The Mariners scored their only run of the game in the inning, but it could have been worse if not for Albert?s spectacular grab.

The Red Sox will head to Bourne tomorrow in search of their fourth consecutive win. First pitch against the Braves is scheduled for 6:00 p.m.