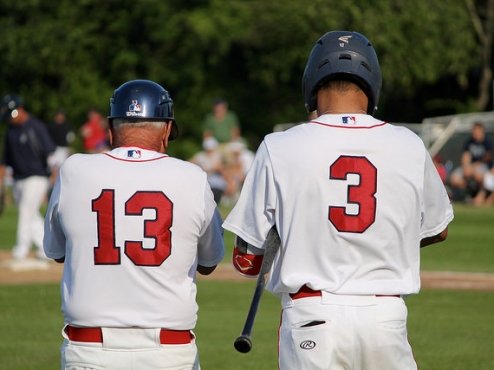 rn by Michael McClearyrnrnMike Casala?has grown used to throwing towards the plate. ?Starting the year as a catcher, he has been an extra arm in the bullpen?the past few outings. ?He showcased power stuff on the mound, routinely?touching the low nineties on his fastball. ?But his role was reversed on Monday. ?Casala?called the game as one of Y-D’s best pitchers showed off his skill.rnrn”From the first pitch, we were on the same page,” Kris Bubic said of Casala. “I know he hasn’t caught in a while, but it was fun working with him.”rnrnBubic tossed six scoreless innings in the Red Sox 4-0 victory over Brewster?at “Red” Wilson Field. ?Casala, who had been a reliever for Y-D over the past few games, came into catch due to lack of personnel. Despite the long time away from being behind the dish, he caught for a pitching staff that completed their first shutout of the year. ?rnrn”(Casala)?did a great job catching tonight,” Bubic?said. “You have a lot of confidence when you have a defense like that.”rnrnCasala?was a late addition to the Y-D lineup. ?The initial lineup had Darren Trainor set to catch the game, but he was scratched for Casala?moments prior?to the game. ?Casala?said that Trainor had been recovering from Tommy John surgery that he received?just over a year ago and the coaching staff was looking to play it safe and not throw him back to back.rnrnFresh off his bullpen assignment, in the first inning of the game, Casala?threw a rope down to second to catch Brewster’s Connor Smith stealing. ?That play is one of the three times all season a Y-D catcher has caught a runner stealing on 27 attempts. ?On his first attempt of the game Casala?showed what a danger his powerful arm could be in any role.rnrn”It was good to get back there,” Casala?said. “I’ve watched (Bubic), but was my first time catching him. ?I liked what I’d seen, I felt great (catching him).”rnrnBubic?praised?his entire defense for its performance on Monday. Only having four strikeouts in the game, he relied on?heavily his defense to make plays for him in the field and they?came through for him.rnrnCasala?played a huge role in Bubic’s?ability to be effective all game. ?While taking orders from Manager Scott Pickler on the sideline, he led the staff to place some pitches perfectly causing batters to swing and miss, ground out, or fly out.rnrn”(Bubic’s) changeup is a really good pitch, that was his out pitch for sure,” Casala?said. ?“(All the pitchers) pounded the zone and got ahead of hitters.”rnrnBubic?referred to his changeup as a “swing and miss” changeup. ?Casala?noted that was a pitch Y-D turned to early and often and it led to a successful outing for both the pitcher and the catcher.rnrnCasala, while he couldn’t go into what his everyday role with the team was, is just happy to contribute.rnrn”I’m just doing whatever I do when my name’s called,” he said.rnrnWhatever that may be.rnrn?rnrn?rnrn?rn