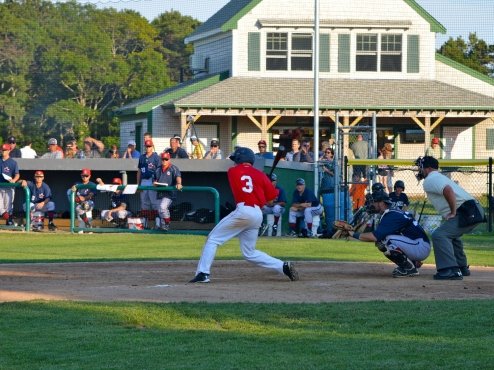 Y-D had its three-game winning streak snapped Sunday evening with a 13-2 loss at the hands of the Cotuit Kettleers. Jordan Ebert (Auburn) made his Kettleers debut with a bang, hitting a grand slam in a seven-run fifth inning and finishing the game with five RBI.

The Red Sox and Harwich Mariners begin a home-and-home series Monday evening with a 7 p.m. game at Whitehouse Field in Harwich. Entering the home-and-home, Yarmouth-Dennis and Harwich have split the season series one-apiece.

The teams will meet again on Wednesday afternoon in South Yarmouth, playing in front of a national television audience on Fox College Sports Atlantic.

Y-D will be showcased on Fox College Sports Atlantic Wednesday afternoon, with Dan Hannigan and Ken Ryan on the call and Katy Fitzpatrick serving as sideline reporter.

Due to contractual restrictions, Y-D will not be broadcasting Wednesday?s game on Teamline.

In the Batting Department

Y-D?s Hunter Cole (Georgia) is second on the team in batting average (.346) entering Monday and leads the team in that category for all players who have appeared in at least 20 games. Former Mariner Jordan Tarsovich (VMI) has also helped pace the Red Sox offense since his arrival, posting a .340 mark.

In addition, Rob Fonseca (Northeastern) has found his way into the limelight, serving as one of the spark plugs of the Y-D lineup. Batting primarily out of the DH spot, the Madison, N.J. native has knocked in 13 runs and has shown how good his eye is, drawing 13 walks on the campaign.

Rising sophomore Justin Jacome (UC Santa Barbara) maintains the lowest earned run average of all Y-D pitchers with at least one start. In his five appearances (four starts), he has compiled a 3-0 record over 22 innings and a 1.63 ERA.

Phil Bickford (Cal State Fullerton) has transitioned to a bullpen role with Y-D after making 10 starts at school in 2014. He has made his mark in the closing role for the Red Sox with five saves, tying him for the league lead entering Monday. Originally from Newbury Park, Calif., he was selected 10th overall by the Toronto Blue Jays in the 2013 MLB Draft.

The Red Sox make their first trip to Veterans? Field in Chatham on Thursday night, facing off against the Chatham Anglers at 7 p.m.

Y-D will return to its Teamline live audio broadcasts for this game, with Anthony Santaniello, Steve Goldberg, and Ryan Gallant on the air.