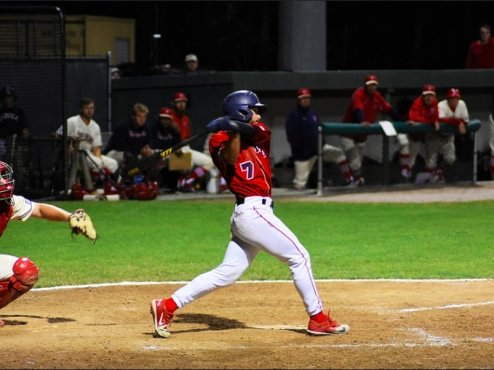 BOURNE ? The Yarmouth-Dennis Red Sox wrapped up the season series against the Bourne Braves Monday night with an 8-3 victory at Doran Park.

Tommy Henry (Michigan) turned in his best start of the season, tossing six innings of two-run ball. The left-hander was efficient, striking out four and allowing only five Braves to reach base on the evening.

Y-D added to the lead in the fifth when Adam Kerner (San Diego) came home on Christian Koss? (UC Irvine) sac-fly to left. Andrew Daschbach (Stanford) then brought Ashford home for the second time on the night with an RBI single, his only hit of the evening.

Zach Zubia (Texas) stepped up to the plate with the bases loaded and a chance to break the game wide open. The slugger from Texas took full advantage and ripped a 2-1 offering from Harrison Rutkowski (Rutgers) to left for a two-RBI single.

The eighth and final run for Y-D was scored in the eighth inning on a Luke Waddell (Georgia Tech) sac-fly that scored Nick Quintana (Arizona).

Braidyn Fink (Oklahoma), Chandler Fidel (Arkansas Little Rock), and Mitchell Tyranski (Michigan State) combined for three innings of relief out of the bullpen. Fink didn?t allow a hit but walked two, narrowly escaping trouble in the seventh. Fidel allowed the only run out of the bullpen, but gave Coach Scott Pickler four outs in a ballgame where he clearly didn?t have his best stuff. Tyranski came on in the ninth to close the door on the Braves and did so without allowing a run.

Welcome to The Show

The Red Sox got a taste of what professional baseball is like with last week?s Fenway Park workout, and another special opportunity awaits them on Tuesday. Y-D will travel to Hartford, Connecticut to take on the Wareham Gatemen at Dunkin? Donuts Park, home of the Hartford Yard Goats, the Double-A affiliate of the Colorado Rockies.

The stadium opened in 2017 and will host the final regular season matchup between the Gatemen and the Red Sox. It will be the only game played at Dunkin? Donuts Park by the Cape Cod Baseball League this season.

First pitch is scheduled for 12:30 p.m in Hartford. The Y-D Red Sox Instagram and Twitter pages will have full media coverage beginning with batting practice at approximately 11:00 a.m.