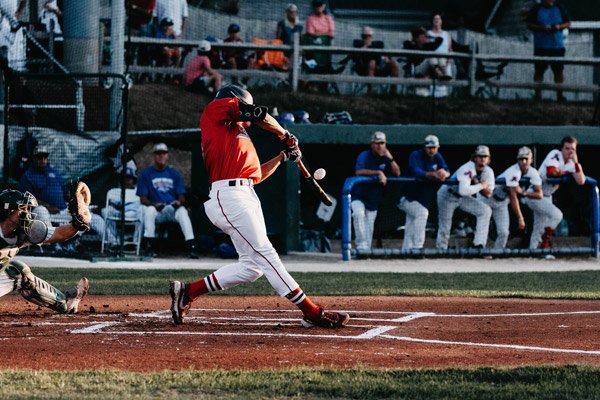 Through four innings on Wednesday in Chatham, it appeared the Y-D Red Sox were getting back to playing at a high level. A 2-2 tie yesterday broke the team’s longest losing streak in a decade, and they held a 4-2 lead heading into the fifth inning against the last-place Anglers.

Needing to avoid a loss to clinch the East division that they once led by 11 points, the Sox appeared to be on the right track.

Then the train derailed entirely.

Chatham got six runs on just two hits over the next two innings en route to an 8-6 win, giving Brewster the East division crown and the top seed in the Eastern division playoffs.

Y-D jumped out to a quick lead, manufacturing a run after Homer Bush Jr. led off the game with a single. Bush stole second, moved to third on a sacrifice bunt from Caden Connor, then scored on an RBI fielder’s choice off the bat of Braden Montgomery.

Lyle Miller-Green quickly responded in the bottom of the first, drilling a solo home run to deep left-center field to get Chatham on the board.

After neither team scored in the second, Montgomery put the Red Sox back in front with a towering two-run home run to right-center field.

Chatham plated one in the bottom half, but Matt Kavanaugh was able to get out of a bases-loaded, no one out jam with the lead. After scoring the first run of the game, Bush drove in a run of his own, knocking in Gunner Antillion in the fourth to extend the Y-D lead back to two.

Y-D failed to extend their lead in the top of the fifth, striking out three straight times with the bases loaded. Chatham capitalized on the exact same situation in the bottom half, with a little help from self-inflicted wounds by the Red Sox.

On a groundball to first, Connor fired home to try and beat the runner to the plate. He rushed the throw, spiking it and sending it into the Chatham dugout, scoring two to tie the game. Chuck Ingram then hit a groundball to short, deep enough to score the runner from third to give Chatham a 5-4 lead.

Chatham broke the game open in the sixth. After two walks to leadoff the inning, Marcus Brown hit a double that went in and out of the glove of Cole Carrigg in center field. Miller-Green and Cooper Ingle hit back-to-back sacrifice flies to make it 8-4.

Y-D was able to plate two and threatened in the ninth but fell short of a win and the elusive division win.

“Can’t give up 12 free passes,” Y-D Field Manager Scott Pickler said after the game. “We outhit them, but we just put too many guys on.”

The Sox have now lost seven of their eight games since the All-Star break (0-7-1). Saying they are limping into the postseason seems generous, as they’ve been outscored 52-25 in those eight games.

“It’s a new season. We start over,” Pickler said referring to the postseason. “We’ll see how it goes. Everybody is 0-0, we’ll see.”

Brewster, the defending league champions, has the tiebreaker over Y-D due to having a better intra-division record. They will have home-field advantage throughout the Eastern division playoffs and they will play the Harwich Mariners in the first round.

The Red Sox open the 2022 playoffs tomorrow, hosting the Orleans Firebirds at Red Wilson Field for game 1 of their best-of-three first-round matchup. First pitch is set for 4 p.m.