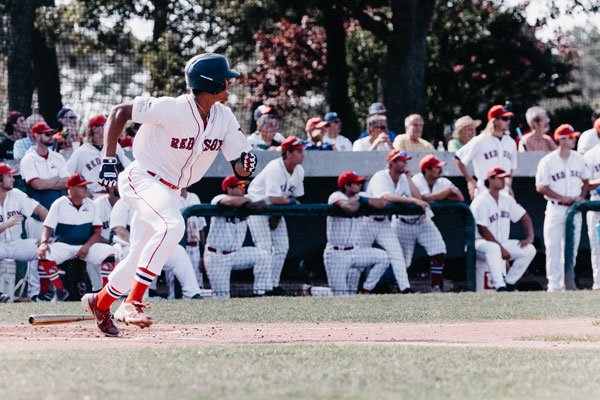 The Yarmouth-Dennis Red Sox saw their season come to an end Monday night at Red Wilson Field, as they fell to the Brewster Whitecaps, 9-7, in Game 2 of the Cape League Eastern Division Finals. Brewster won the best-of-three series, 2-0.

It wasn’t without a fight, though. The Red Sox took a 4-2 lead, then cut it to 7-6 after the Whitecaps edged ahead. Gunner Antillon had four hits, including a homer and a double, Cole Carrigg also homered and pitched two shutout innings, and Braden Montgomery drove in three.

On the field, Carson Demartini, the hottest hitter on the planet, put Brewster up in the third inning with the longest homer hit in the Cape League this summer — a whopping 457 feet to straight away center field, clearing the treetops beyond the fence at Red Wilson Field.

The Red Sox knotted the game at one in the bottom of the third on an RBI single from Braden Montgomery. It was a perfectly-executed hit-and-run, as Caden Connor scored from second on the chopper to the outfield because he was running on the pitch.

Demartini continued his tear in the fifth with another mammoth homer, this time 434 feet to deep right field. It was Demartini’s fourth homer in the series and his fifth extra-base hit. His tear got so rampant that the Red Sox didn’t give him a pitch to hit in his next two at bats. He was intentionally walked in the sixth, then walked on five pitches in the seventh.

But the Red Sox responded with a big three-run inning in the bottom of the fifth. After Cole Carrigg led off the inning with a double, Montgomery drove Carrigg and Woody Hadeen in with a two-run double to left-center.

Hayden Schott followed that with an RBI single off the wall in center field later in the inning to give Y-D a two-run cushion.

But the top of the sixth was Y-D’s undoing. The Whitecaps tallied five runs on six hits off Luke Jewett, who entered before the fifth inning.

Carrigg responded in the bottom half with a two-run homer, his first since Opening Day, which cut the Brewster lead back down to 7-6.

The Whitecaps scored two more in the top of the seventh, and the Red Sox got one of their own through a home run by Gunner Antillon, his first of the season.

On the mound, the Red Sox got a strong start from Drew Dowd, who surrendered just one run in four innings of work while striking out five. Cole Carrigg also pitched scoreless eighth and ninth innings for the Red Sox to keep them within striking distance.

Caden Connor kept the Red Sox in the game with a huge catch in the eighth inning, robbing a home run over the centerfield fence and denying Cameron Fisher of what would have been a huge, momentum-swinging hit.

But at the end of the day, Brewster’s closer Brennen Oxford kept the Y-D bats quiet over his three innings of work, allowing just the Antillon homer and closing out the game to send Brewster back to the CCBL Championship for the second year in a row, simultaneously bringing Y-D’s season to an end.