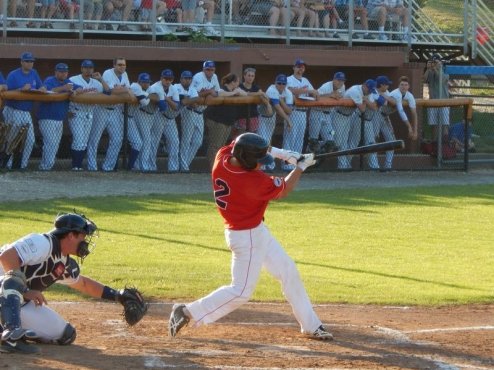 The Yarmouth-Dennis Red Sox had lost two of their last three games coming into Red Shirt Friday and Red Wilson Field. The Cotuit Kettleers traveled to South Yarmouth for their first time this summer and the Sox wanted to send a message.

The Sox sent tall Illinois State right hander, Daniel Savas, to the mound for his second start of the summer.? And was he lights out or what? Savas was dominant the whole night, which is something new for the Sox this season.? Usually, the Sox pitching has had one bad inning in a game that has cost them the win, but last night, that wasn?t the case.? From the gitgo, Savas had command of all of his pitches, hitting his spots and making the defense make some outs behind him. Savas went seven innings, only giving up 2 hits, striking out 7 Kettleers.? He put his team in a position to win the ball game.

The Sox hitting, once again was outstanding.? They put up 10 hits in the ballgame which has become the norm for them as of late.? The Sox got out to an early 3-run lead in the 2nd inning when Kettleers starter, Alex Haines, who has been dominant all season, got into a jam, walking four straight Sox hitters.? Haines was quickly relieved of his duties.

The Sox would get after it once again in the 6th inning when they added 5 more runs to the scoreboard to blow this game wide open.? This was at the hand of Florida State Seminole, DJ Stewart. Stewart who missed the last three games for the Sox because he traveled to Omaha to compete in the College World Series Home Run Derby.? And his home run swing came in handy as he hit a ?No Doubt About It? home run to deep left-centerfield to increase the Sox lead to 8.

The Sox would add two more runs in the last few innings to take a 10-0 win over the Cotuit Kettleers to even up the season series between the two.? The Sox are now sitting at a .500 record at 9-9-1 and the Kettleers at 11-8.

The Red Sox will be back in action tonight, July 6th, in Falmouth to take on the Commodores at 6:30 p.m. ET.? Check our twitter (@YDBroadcast) and our Facebook pages for updates on the game as well as updates on the team.