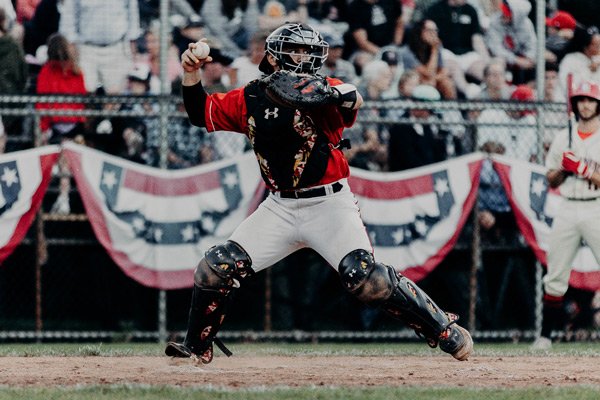 The last time Y-D traveled to Harwich, they lost their third straight to move to 0-3-1 on the young season. Despite the rocky early start, Field Manager Scott Pickler remained optimistic.

“We can play with anybody in this league,” he said after the game on June 16 while pointing to the scoreboard in right-center field.

The mood and energy surrounding the Red Sox could not be more different after their 9-0 win in their second trip to Harwich on Tuesday night.

The Sox are now 9-4-2, winners of nine of 11 since their last outing at Whitehouse Field, firmly in first place atop the East Division.

After a 39-minute electrical delay threatened the status of the game, the two teams were able to kickstart their third meeting of the season after splitting the first two.

The Red Sox capitalized off an error in the top of the 2nd for the game’s first run. After Gunner Gouldsmith struck out to presumably retire the side, he was able to run to first because of a dropped third strike.

The throw was mishandled by Harwich 1B Joe Vetrano, and the ball trickled down the right-field line to allow Mike Boeve to scurry home.

In the fourth, after both Cole Carrigg and Jonny Long drew walks to lead off the 4th, Jack Costello had his best at-bat of the season, sending a full-count offering into the woods beyond the left-field fence.

“Felt good,” Costello said after the game. “Two strike count, I saw a curveball up. Put a good swing on it, got the barrel on it and it got out of here.”

Carrigg added an RBI double in the 5th to make it 5-0, and Pas Ferreras drove in another on a sacrifice fly in the 8th. The Sox tacked on three more in the 9th to turn it into a blowout.

The Mariner offense offered nothing more than feeble resistance in return, struggling to string together baserunners and get to the Y-D pitchers.

The Sox staff continues to excel. With their 2nd straight shutout and just one run allowed in their last three games, they’ve lowered their team ERA to 1.92.

Romero was excellent in his first start of the summer, building off strong relief outings earlier in the season. In five shutout innings, Romero generated weak contact, allowing only two hits and striking out three.

“I felt that my conviction was really good today,” Romero said. “I felt like I was actually locked in. It was a good outing.”

In his first appearance since bruising his thumb, Dylan Ray was just as impressive, allowing just one hit in two shutout innings. Bayden Root and Conner Thurman each added a shutout inning to finish off the Mariners. As a team, the Sox only gave up four hits and struck out nine.

“It’s all coming from our pitching,” Carrigg said after the game when discussing the key to the team’s recent hot streak. “They’re doing a great job and giving us a chance to win games.

“We just need to get a few runs, don’t need to do too much. That helps a lot.”

Y-D has now won five in a row and has a four-point lead over the Brewster Whitecaps atop the East division.

Join us tomorrow at Red Wilson Field early for a pregame ceremony honoring Pickler and his accomplishment in becoming the all-time winningest coach in Cape Cod Baseball League history.

Stick around for a matchup with the 11-2-2 Cotuit Kettleers. First pitch is slated for 5 p.m.