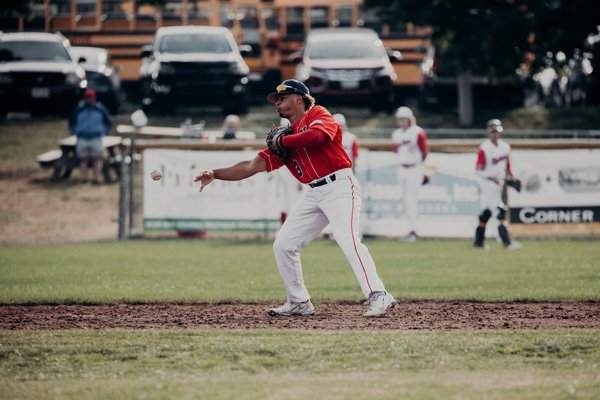 In the first outing of the 2022 season, the Y-D Red Sox and the Orleans Firebirds played to a 4-4 tie at Eldredge Park on Sunday night.

The ball game got off to a bumpy start for the Sox, as three hits and an error plated three for the Firebirds in the first inning.

Y-D responded immediately, as Western Carolina’s Pas Ferreras hit a two-run home run in the 2nd, and Xavier’s Luke Franzoni hit a solo shot in the 3rd to tie the game at three.

Orleans retook the lead in the bottom half of the third on a Luke Keaschall solo shot.

After the homer, Cal Poly Ponoma’s Will Rudy settled in nicely, retiring nine of the last 10 batters he faced, including the final eight.

Rudy finished after five innings, allowing four runs (three earned), four hits, one walk, and three strikeouts. Jared Lyons came in out of the pen to start the sixth and faced the minimum in three hitless innings.

In the top of the 7th, Cole Carrigg tallied his third hit of the day, putting one just over the 300-foot sign down the left-field line to tie the game.

Y-D was able to get the bases loaded in the 8th but failed to capitalize. On the night, they left nine runners on base.

Cole Roberts came on to pitch-run in the 9th after an infield single from Johnny Long and promptly stole second.

On a swinging bunt single from Mike Boeve down the first base line, Roberts rounded third and tried to take home when pitcher Josh Allen bobbled the ball after picking it up, but Allen recovered in plenty of time to throw Roberts out at the plate.

Orleans was shut down in the 9th by Alabama’s Dylan Ray, and the ballgame was called due to league rules; preventing extra innings.

Field Manager Scott Pickler understands the need to limit the length of games but was frustrated postgame that they were unable to at least play one extra frame.

“It’s an empty feeling for the fans and the players to end a baseball game after nine innings,” Pickler said.

Pickler praised Rudy and the team for how they bounced back after going down early.

“It shows you something,” Pickler said. “They have got to learn how to play nine innings, doesn’t matter how much you go down.  You come out each inning and try to produce, I thought we did a nice job of that.”

Defensively, Simon Reid stood out behind the plate, throwing out runners at second in the sixth and eighth, putting a bow on a strike-em-out throw-em-out double play in the sixth.

Now at 0-0-1, the Red Sox will play at Brewster tomorrow at 5 p.m. at Stony Brook Field, looking for their first win of the season.

The home opener is on Tuesday and is the second of a back-to-back against Brewster. Tuesday is also a 5 p.m. start time at Red Wilson Field.