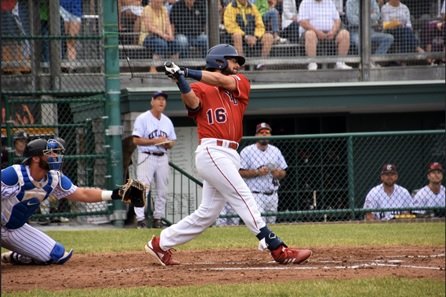 For the first installment of Yarmouth-Dennis Red Sox alumni spotlight, I’ll be taking an in-depth look at one of the star players from the 2019 Y-D Red Sox team, Austin Wells. Wells, a left-handed catcher, had a tremendous first year at the University of Arizona, where he slashed a robust .353/.462/.552 and finished in the top 10 of the Pac-12 in batting average, hits, triples, runs batted in, and on base percentage. Following the season, Wells took to the Cape to showcase his talent in the highest regarded wood-bat collegiate summer baseball league in the nation.

During his time with Y-D, Wells showed everyone why he was considered a top 3 prospect on the Cape, and one of the premier prospects in the 2020 MLB Draft, flashing a little bit of everything during his time with the Red Sox. Wells led the Sox in games played, appearing and starting in 42 games throughout the season. Transitioning to using a wood bat, which notoriously has less power, and a smaller sweet spot than the metal bats used in college, Wells showcased elite offensive peripherals and ability to get on base slashing .308/.389/.526 against some of the best talent in the country. What’s more impressive was the raw power he put on display over the summer, hitting a team leading seven home runs, which was two more than he had during the Pac-12 season, in 65 less at-bats. Wells also showed the same knack for driving in runners and hitting in the clutch that he flashed in college, leading the Red Sox with 26 runs batted in.

Scouting wise, Wells grades out above average on the traditional 20-80 scale (20 being poor, 50 being average, 80 being outstanding) receiving a 55 in both his Hit and Power tool department. Defensively, Wells grades out a little less favorably. Primarily a catcher, scouts have been concerned about Wells’s long-term ability to stick behind the plate. He is known for his bat, and because of some elbow issues that have persisted since he was younger, some feel that his long-term home in the field will not be behind the plate. Luckily for Wells, one thing that he has on his side is remarkable versatility. Wells split time with the Red Sox playing both catcher and the outfield, where he committed no errors. He also played a solid amount of first base with Arizona, so should he not stick behind the plate permanently, he can make an easy transition to first or to the outfield. Unlike most catchers, Wells possesses rare speed, running hard and effectively, stealing eight bases in eight attempts with Y-D, and another seven bases in seven attempts with Arizona.

Wells was selected 28th overall by the New York Yankees in the 2020 MLB First-Year player draft, making him the third Y-D Red Sox alumni to get drafted in the first round of the draft from the last three seasons, joining 2017 alumnus Nico Hoerner and 2018 alumnus Patrick Bailey in accomplishing that feat. Currently the Yankees 6th best prospect, Wells has yet to appear in a professional game after the COVID-19 pandemic shut down Minor League Baseball last season. However, because of his advanced age (21) Wells should be on a fast-track to the MLB and could see action as early as the 2022 season, although 2023 could be a more modest expectation.

Overall, Wells projects to be an above average hitter who should hit for contact, power, and get on base at a relatively high clip. His left-handed swing could play even better at the hitter-friendly Yankee Stadium with the potential to be a perennial 25+ Home Run threat. Wells’ incredible versatility and ability to run makes him all more valuable, with the potential to make an impact not just on the bases, but behind the plate, at first base, or in the outfield. With one of the best single seasons in recent Y-D Red Sox history, Wells will always be remembered for his time on the Cape and is wished all the best of luck as his career takes off with the Yankees.