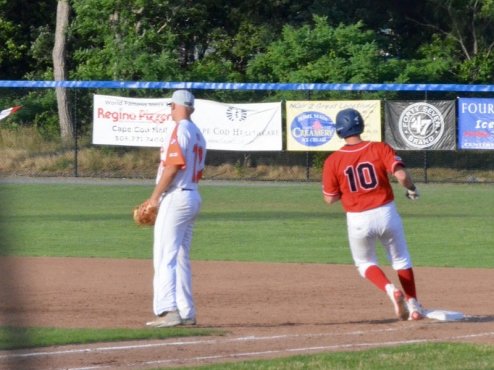 Toffey went 4-for-5, with one RBI and one run scored, extending his hitting streak to four games.

Deon Stafford (Saint Joseph?s), Kevin Smith (Maryland) and Matt Whatley (Oral Roberts) all had two hits in the contest, as the Red Sox put a total of 16 across the board.

Brewster wasted no time and pushed across three runs in the first inning. Bryce Jordan (LSU) got it started with a one-out single to center field. After a sequence of errors in the outfield, Jordan scored to give the Whitecaps an early 1-0 lead. Logan Warmoth (North Carolina) advanced to third, and would cross the plate on a wild pitch. After drawing a walk, Brent Rooker (Mississippi State) would come around to score on a Matt Davis (Virginia Commonwealth) sacrifice fly.

Y-D acquired their first run of the game in the second frame. Smith was knocked home on a Whatley RBI single, after leading off the inning with a double.

In the third, the bats got going for the Red Sox, as they took the lead and added some insurance. Toffey, JJ Muno (UC Santa Barbra) and Brendan Skidmore (Binghamton) all recorded singles, loading the bases. To follow up, a Matt Winaker (Stanford) RBI single knocked in Toffey, putting Y-D within one. Stafford?s two-RBI double gave the Red Sox a 4-3 lead, and a Whatley single along with a sacrifice fly from Tyler Houston (Butler) made the score 6-3 by inning?s end.

Solo blasts by Zack Gahagan (North Carolina) in the fifth, and Colby Fitch (Louisville) in the sixth, respectively, pulled Brewster within one. In the seventh, the Whitecaps tied the game at six apiece after an RBI single by Warmoth.

Houston was on his horse and beat out a grounder to short with two outs in the bottom of the eighth. He scored from first on a Corey Dempster (USC) RBI triple to take the lead. A beautiful bunt by Toffey scored Dempster and gave the Red Sox a two-run lead heading into the top of ninth.

Bryan Pall (Michigan) came in and shut the door, recording his fourth save of the season.

Michael Baumann (Jacksonville) got the start for Y-D going for 4.1 innings with six strikeouts. Tyler Zuber (Arkansas State) was on the hill for Brewster, tossing three innings with one strikeout. Both received a no-decision.

Calvin Faucher (UC Irvine, 2-0) picked up the win in relief, while Zacary Lowther (Xavier, 2-1) was hooked with the loss despite six strikeouts over 2.2 innings.

The Red Sox face off against the Orleans Firebirds at Red Wilson Field on Wednesday. First pitch is at 5 p.m.