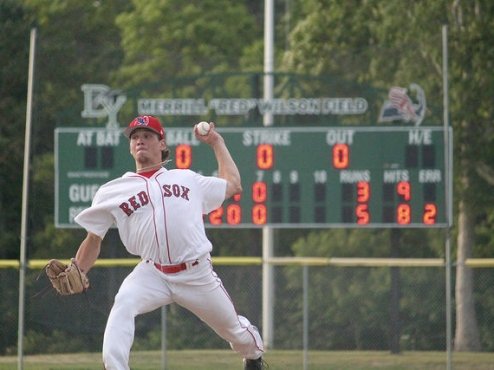 Josh McMinn lost control of another one. ?In just two innings of work, he had already struck three batters with errant pitches and it looked like his struggles would force him out of the game. ?It was a slow start for the Red Sox team, one that has had notable pitching struggles over the past couple of games. ?Then, the script flipped.

“The beauty of baseball is that I know we?re going to have to score runs,? McMinn said. ?All I needed to do is get some zeros and we?re going to win.?

The Red Sox pitching had a strong outing on Thursday. Following the slow start, McMinn responded with three straight scoreless frames. ?An outing that looked like would have a tough time making it out of the second inning went deep into the sixth. ?Brendan Nail then came in and finished the job tossing all but the final pitch of the game.

“You have to keep them off balance,? Mcminn said. ?If you execute pitches people will get themselves out. I don?t have to do too much.?

In the early going, McMinn was having trouble placing balls around the plate. ?The three hit batters were just one of the problems that arose from his lack of command, but he noted that the other ones he placed high and Cotuit was ?crushing them.”

The early struggles were not a concern for him however as he just was focused on placing his pitches better. ?He called Manager Scott Pickler?s trust to keep him in the game through his early struggles ?humbling.”

“He knows I?m capable of doing it,? McMinn said. ?If I?m worried about getting pulled, then I more likely to do poorly. ?I just have to execute.?

Pickler has had a short leash with his pitching with his pitching in the early stages of the season, but he gave McMinn the benefit of the doubt as he realized his own mistakes could have been the reasoning for McMinn?s slow start.

“I made the wrong calls on that, that was my fault,? Pickler said. ?I called the wrong pitches, I didn?t get him into a rhythm before I started doing things.?

He added that once McMinn started throwing his changeup he got into a better rhythm and started making outs. ?McMinn credited his slider as the pitch that turned the corner for him after the first two innings.

McMinn wasn?t the only Red Sox pitcher dealing on Thursday. ?Nail came in and delivered what coach Pickler called an ?unbelievable performance? and ?by far his best outing.? Pickler left Nail out there for almost a full four innings, far beyond the time many of the other Y-D pitchers coming in relief cameos went.

“It boosts my confidence. ?He knows I could go the distance,? Nail said. ?He did trust me to go out there and dominate no matter what.?

Nail said that his slider was really working well for him. ?He added that his slider was never a pitch he really relied on, but since coming to the Cape has made it a focal point to turn it into a primary pitch. ?He did just that, saying that he was able to turn to it in all situations.

Coach Pickler relied heavily on Nail in the late stages of the game because of his dominance against lefties all game long. Cotuit had a few strong lefties in their lineup and they hadn?t been able to touch Nail when he got things going.

Both Nail and McMinn gave a lot of credit to the Y-D defense for their performance. ?Both of them said that the Red Sox are the ?best defense? they?ve played with, with McMinn adding ?by far.? ?The dominant Y-D staff remained humble throughout its successes.

“These guys are the best players on their teams throughout the country,? McMinn said. ??It?s just and honor to play with them.?