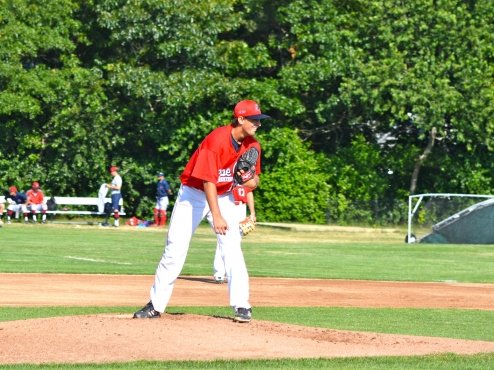 Cody Poteet (UCLA) took the mound Wednesday night and gained the win, improving to 3-0 on the year. He struck out five Chatham Anglers. Photo by Kyra McDonald/Y-D Red Sox

SOUTH YARMOUTH, Mass. ? The Red Sox overcame a 4-0 deficit with a great comeback victory over the Anglers. They rallied in the fifth inning to score seven runs and gain the lead.

Two Pac-12 pitchers took the mound to duel in Wednesday night?s game. Kyle Davis (USC), an East Division All Star selection, took his first start of the summer for Chatham. Davis pitched 4.5 innings, giving up seven hits and runs while striking out four. Cody Poteet (UCLA) got the start for the Red Sox as he pitched five complete innings where he gave up seven hits and two earned runs while striking out five.

The Anglers struck first as they scored twice in the first inning however both runs were unearned for Poteet. Nick Collins (Georgetown) would hit a pair of RBI singles in the third and fifth inning to score Ty Moore (UCLA) both times, giving Chatham the 4-0 lead.

It was in the fifth inning when the Red Sox bats exploded. They scored seven runs on eight hits. Six Y-D players would earn themselves an RBI. A.J. Simcox (Tennessee) would be the first to get an RBI as he singled, allowing Josh Lester (Missouri) to score Y-D?s first run of the game. The Red Sox didn?t stop there as Nico Giarratano (San Francisco), Andrew Stevenson (LSU), Vincent Jackson (Tennessee), Jordan Tarsovich (VMI), Jesse Jenner (San Diego), and Lester (Missouri) would all bring in a run.

Head coach and manager Scott Pickler said, ?I thought everybody in the order participated in the big [5th] inning. A lot of good things happened. I thought it was a team win, every guy contributed in that inning.?

Pickler?s spoke to the players after the tough 12-1 loss to Harwich on Tuesday night, ?I told them last night that we get to play again tomorrow. You gotta put this one behind you. You come back and get yourself ready to play.?

The Anglers would not score another run the rest of the game, only managing three hits after the fifth inning. Meanwhile, the Red Sox would tack on another insurance run in the seventh inning. Jenner (San Diego) would bring in Tarsovich (VMI) on an RBI double.

Pickler credits Y-D?s recent success to chemistry, ??The chemistry?s gotten good with these kids. It?s nice to see other guys in the dugout rooting for the other guys and not worrying about themselves.?

The Red Sox will be back in action tomorrow night at Red Wilson Field, as they take on the Bourne Braves. First pitch is set for 5 pm.