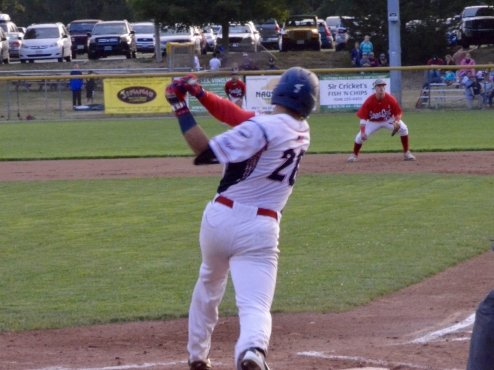 ORLEANS, Mass. ? In one of the more exciting games of the season, the Yarmouth-Dennis Red Sox (14-10) defeated the Orleans Firebirds (12-12) by a score of 8-6 on Friday night. With 2.2 scoreless innings of relief, Collin Snider (Vanderbilt) earned the win and moved to 2-0 on the season, while Kit Scheetz (Virginia Tech, 0-1) was tagged with the loss.

The Red Sox offense was powered by Corey Dempster (Southern California) and Brendan Skidmore (Binghamton) who had three and two hits, respectively, and both drove in two runs.

Erich Uelmen (Cal Poly) got the start for the Red Sox, entering the game not having allowed a run in 11.2 innings of work this season. Uelmen had allowed just two hits in his last two starts and looked like the clear ace of the Y-D pitching staff. But, Orleans got to him for five runs in 4.1 innings in Friday?s game and he did not receive a decision.

Sean Guenther (Notre Dame) took the hill for Orleans, coming off an excellent outing in which he shut down the Brewster Whitecaps, who have scored the most runs in the league thus far, over 4.1 innings. Guenther was great through the first three innings, tallying five strikeouts and not allowing a hit. But, he wasn?t able to record an out in the fifth inning and ended up being charged with three runs.

The Firebirds jumped out to an early lead in the top of the first, as Brian Miller (North Carolina) led off the inning with a single and Zach Kirtley (St. Mary?s) was hit by a pitch, giving Orleans runners on first and second. Riley Mahan (Kentucky) followed with a single, scoring Miller and pushing across the first run of the contest for Orleans. Ethan Paul (Vanderbilt) later executed what has been a staple of the Y-D Red Sox offense this season, the safety squeeze, to drive in Kirtley and give the Firebirds a 2-0 lead.

After a slow start, the Red Sox offense came alive in the top of the fourth. With two outs and JJ Schwarz (Florida) at first base, Deon Stafford Jr (Saint Joseph?s) lined a double down the left field line, moving Schwarz to third. Corey Dempster (Southern California) then cleared the bases with a double, and Y-D tied the game, 2-2.

Two singles and walk loaded the bases for Y-D with one out in the fifth, which was enough to chase Guenther from the game and brought Schwarz to the plate. He ripped a line drive to left field, which would have cleared the short fence if not for a leaping play by Miller to snare it out of the air.

But, Connor Wanhanen (Texas Christian) was able to tag up on the play and score from third, giving the Red Sox a 3-2 lead. Kevin Smith (Maryland) then hammered the first pitch he saw 430 feet to center field for a ground rule double, scoring Tyler Houston (Butler). This would have been a home run at nearly every other park on the Cape, but the diamond-shaped outfield at Eldredge Park kept Smith at two bases.

Orleans battled back in the bottom of the inning, however, as four Firebirds crossed the plate to retake the lead, 6-4. Adam Haseley (Virginia) singled home Miller for the first run of the inning, and Paul hit a three-run home run that, with the help of the wind, just snuck over the left field wall.

Dempster stayed hot at the plate in the top of the sixth, as he led off the inning with single and advanced to second on a wild pitch. Despite falling behind in the count 0-2, Mikey Diekroeger (Stanford) ripped a double off the base of the fence in right field, scoring Dempster and cutting the deficit to just one run.

After going back and forth over the middle innings, the Red Sox were able to get within striking distance in the top of the eighth and take advantage. Will Toffey (Vanderbilt) worked a four-pitch walk with one out in the inning, and Dillon Persinger (California State Fullerton) followed with an infield single to the hole at shortstop. Skidmore, who entered the game hitting .391 with runners in scoring position this season, roped the pitch from Scheetz into left-center field for a double, scoring Toffey and Persinger and giving the Red Sox a 7-6 lead.

Nolan Brown (Texas Christian), a defensive replacement in the bottom of the eighth, added an insurance run for the Red Sox in the top of the ninth, taking a pitch from Brandon Bielak (Notre Dame) into the Firebirds? bullpen for a solo home run.

Bryan Pall (Michigan) worked a scoreless ninth inning to nail down his fifth save of the season. Pall has not allowed a run since June 16th and has 13 strikeouts in 10.2 innings of work this season.

Nolan Brown, known for his speed and excellent defense, hit his first home run of the season. He?s been much more valuable to the team than his .184 batting average may suggest.

Mikey Diekroeger has a .224 batting average this season but is hitting .375 with runners in scoring position. He added to that today with his RBI double in the sixth that scored Dempster from second base.

Before tonight?s game, Erich Uelmen?s BABIP (Batting Average on Balls In Play) was .116, which was very low relative to league average. This means that the balls in play that Uelmen was allowing were falling in for hits at a very low rate.

Studies at the Major League level show that a pitcher has very limited or no control over how often the balls in play that they allow end up as hits, suggesting that some part of Uelmen?s performance this season was due to luck. While there was certainly an overwhelming skill component involved, having an ERA of 0.00 after two starts likely involves some luck.

After tonight?s game, Uelmen?s BABIP is .197. Tonight?s hiccup was likely a correction, and perhaps an overcorrection, of some of the good fortune Uelmen had at the start of the season, and not indicative of his overall skill level.

While going 0-for-2 on the night, Tyler Houston drew a walk in the fifth inning, extending his on-base streak to 13 games.

Calvin Faucher (California Irvine) was once again excellent in the eighth inning, throwing ?back foot? sliders to left-handed hitters and striking out one. He has dominated hitters this season, striking out 15 opponents in only 10.1 innings pitched.

With the victory, the Red Sox are now just four points behind the first-place Harwich Mariners, who are just 5-5 in their last 10 games. The Red Sox have won 10 of their last 13 games and have a four point lead over the Firebirds in the East division. Y-D has also scored the second-most runs in the league this season, with 112 runs scored.

The Red Sox will host the Bourne Braves tomorrow at Red Wilson Field. First pitch is at 5 p.m.