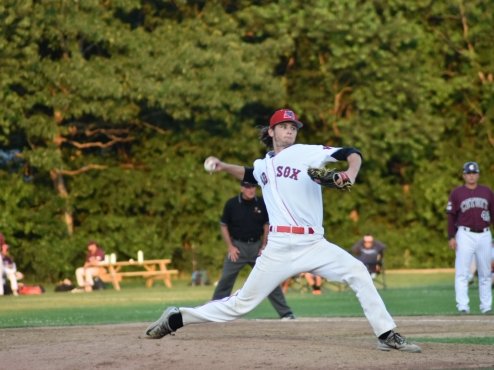 HARWICH ? The Yarmouth-Dennis Red Sox took sole possession of first place in the East Division with a 3-2 win in 11 innings over Harwich on Wednesday night. The win extends Y-D?s winning streak to three games, the second such streak they have had on the season.

Adam Kerner (San Diego) opened the scoring for the Red Sox on the evening, smacking an opposite-field RBI single to score Jonny DeLuca (Oregon) in the second.

The Red Sox added their second run of the night on a Noah Campbell (South Carolina) home run, his first of the year.

On the pitching side, Brant Hurter (Georgia Tech) was fantastic once again, throwing five innings, allowing two hits, two walks, one earned run, and picking up seven strikeouts. Hurter?s 20 strikeouts tie him with fellow Red Sox Alec Marsh (Arizona State) for second in the league and his 1.20 ERA is fifth among all qualified pitchers in the CCBL this season.

Tristan Baker (Western Carolina) came on in relief of Hurter and threw three innings of one-run baseball, but the story of the game for the Y-D pitching staff was Ryne Nelson?s (Oregon) shutdown performance.

With the game tied at 2-2 heading into the bottom of the ninth, Harwich was looking to take care of business and walk off. Baker started the inning by allowing a leadoff double to Brad Debo (NC State) so manager Scott Pickler elected to call on Nelson out of the bullpen. In an obvious sacrifice bunt situation, Matt Gorski (Indiana), bunted the ball straight back to Nelson ? who appeared at shortstop in 50 games for the Oregon Ducks this season ? who fired to third to cut down the runner.

The Red Sox were unable to score in the top of the tenth, and after Nelson threw a clean bottom half of the inning, Adam Kerner?s bat struck once more. With two out and Luke Waddell (Georgia Tech) on third, Kerner roped an RBI single, this time into left field, to put Y-D ahead for good.

The drama did not end there, though. Nelson came back out for the bottom of the eleventh and gave up a leadoff double to Nate Eikhoff (Virginia). He then retired the next three hitters on a foul out and two strikeouts. Nelson finished the day with five strikeouts and his first win of the season.

?It?s great,? Nelson said about getting the win. ?Not many people get to say they picked up a Cape Cod League baseball win. So it?s awesome.?

Ryne Nelson?s game-saving fielder?s choice at third base. In a 2-2 game with nobody out and a runner on second in the ninth, Ryne Nelson was called upon in relief. The pitcher/shortstop was able to field a sacrifice bunt back to him and throw a laser beam to third to throw out the runner by two steps and neutralize the Harwich threat late in the game.

The Red Sox are back in action Thursday night against the Bourne Braves. First pitch at Doran Park in Bourne is scheduled for 6 p.m.