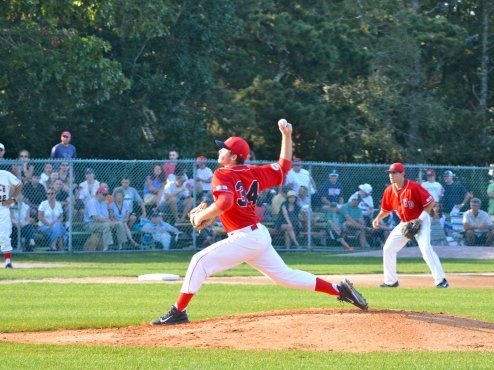 TUCSON, Ariz. ? Five former Y-D Red Sox were tabbed as Preseason All-Americans by the Collegiate Baseball Newspaper last week. Three of the five were from the 2014 CCBL Championship team, and the other two were from the 2013 squad.

Leading the way on the first team is 2014 ace Walker Buehler of Vanderbilt University and 2013 OF D.J. Stewart of Florida State University, both of whom are also alumnus of Team USA.

Buehler, who led the Commodores to a College World Series last summer, went 2-0 in the Cape League regular season with a 1.35 ERA, and then proceeded to go 2-0 with a 0.00 ERA in 13 strikeouts in the playoffs. His postseason effort won him Co-MVP in the playoffs, along with teammate and battery mate Marcus Mastrobuoni.

Stewart was a standout in 2013 in the Cape Cod Baseball League, hitting .270 and leading the Red Sox with 24 RBI, earning All-Star honors in the process. Stewart had a lot of hype coming in after his freshman season in Tallahassee, and certainly put on a show to the Y-D faithful almost every time he took the outfield.

On the second team of All-Americans are James Kaprielian, Michael Murray and Tyler Jay, who all were pitchers for the Red Sox.

Kaprielian, a righty out of UCLA, did not record a decision on the Cape, but ended the season with a 1.80 ERA in five appearances. Also a 2013 Cape League All-Star, he was a big time arm for the Red Sox in his time, and was a dependable option to go to in a must win game.

For Michael Murray, he was up for player of the year after having a sensational season at Florida Gulf Coast. He went 13-1 at FGCU with a 1.85 ERA, which modeled after former Eagle & Red Sox pitcher Chris Sale.

Tyler Jay wasn?t with Y-D for long, but he was impressive in his time at Red Wilson Field. Jay was a lefty out of the bullpen that was the go-to arm for Scott Pickler early in the season. In three appearances, he had a 1.92 ERA with a save in 4 2/3 innings. At Illinois, he went 4-1 with a 1.94 ERA in 23 appearances.