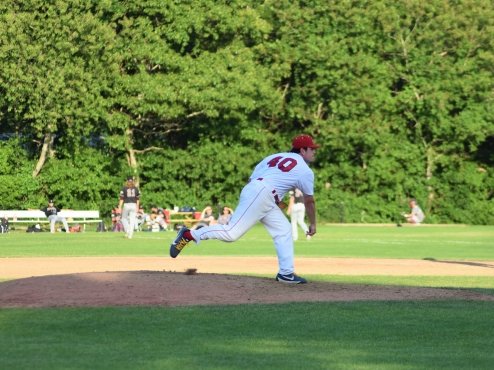 SOUTH YARMOUTH ? Saturday night was a night to forget for the Red Sox, as they fell to the Falmouth Commodores by a score of 8-0 at Red Wilson Field.

Right-hander Jensen Elliott (Oklahoma State) made his highly-anticipated season debut for Y-D, getting the start on the mound for Saturday?s contest. Elliott struggled from the get-go, allowing one run to score with two outs in the first inning before coughing up two more in the fourth.

After Elliott made his exit, things just got worse. Blake Deatherage (UNC-Wilmington) started the fifth inning off with a nasty curveball that froze Falmouth leadoff hitter Will Brennan (Kansas State). He followed that up with another strike and then proceeded to throw eight of his next ten pitches for balls, allowing free passes to Brennan and the two-hitter, Hayden Cantrelle (UL-Lafayette).

Deatherage was lifted for St. Mary?s left-hander Tyler Madrigal. Madrigal let both Commodores on base come around to score and could only stop the bleeding after five Falmouth batters had crossed the plate in the inning.

After five innings, the score was 8-0. It would stay that way for the rest of the game.

The lone bright spot of the day for Y-D was William Frank, the junior from Canisius College. Frank was on mop-up duty for the Red Sox Saturday night but made the most of his opportunity, throwing two scoreless innings with four strikeouts. The only baserunner he allowed was courtesy of an error by shortstop Christian Koss (UC Irvine) who came on as a defensive replacement for Luke Waddell (Georgia Tech).

The bats were quiet on Saturday night; Y-D managed only five hits on the day. One of them came off the bat of Quin Cotton (Grand Canyon) in the first inning to tie him for the team-lead in hits with six.

The Red Sox were largely overmatched, though, by Falmouth starter Matthew Canterino (Rice). Canterino racked up five strikeouts, needing just 72 pitches to get through six innings. Falmouth pitching sat down nine batters via strikeout in the contest versus just eight baserunners allowed.

Fortunately for Y-D, they will likely not have to see Canterino again; the righty is headed to a tryout with the US Collegiate National Team at the end of the month. And despite the loss, the Red Sox still sit tied for first place in the East Division with five points.

Matthew Canterino?s snag in the sixth inning off a Quin Cotton line drive. Cotton made a good bid for his second hit of the day in the sixth inning with a line drive right back up the middle. Canterino had other plans. He snatched the liner right out of the air and nearly doubled off Jimmy Govern (Eastern Illinois), who reached second base via double in the prior at-bat.

The Red Sox are back in action tomorrow with a Father?s Day twin bill scheduled in Cotuit. Game one will begin at approximately 2 p.m.