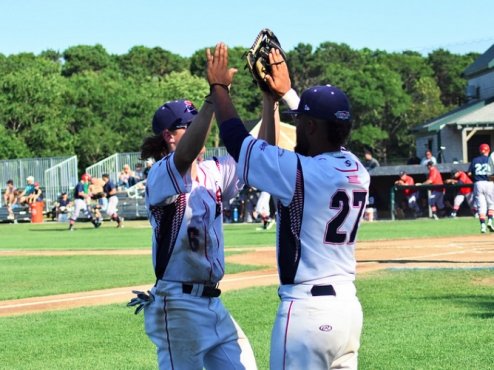 FALMOUTH- The Yarmouth-Dennis Red Sox evened the season series with the Falmouth Commodores with a 4-2 win at Guv Fuller Field in their last meeting of the summer Friday.

Coming into Friday evening?s matchup, the road team had won the previous three games this summer. The Red Sox continued their winning ways, grabbing a lead in the fourth inning that they wouldn?t relinquish.

Blair Henley (Texas) made his second start of the season for Y-D but ran into trouble early. After retiring Logan Davidson (Clemson), the leadoff man, Henley allowed a double to Maverick Handley (Stanford) for the Commodores first hit of the evening.

Kyle Stowers (Stanford), a teammate of Handley?s at Stanford, brought home the first run of the game on a single to right field.

The Red Sox answer came in their very next turn at-bat, as Brad Beesley (Cal Poly) led off the second with a double. He wouldn?t remain on the base paths for long; Christian Koss (UC Irvine) singled to the pitcher, Will Ethridge (Ole Miss), who made a throwing error that allowed Beesley to cross the plate and tie the game.

Koss got the scoring started again in the fourth with his second infield single of the game. A single off the bat of Nick Quintana (Arizona) allowed Koss to advance all the way to third, and he scored standing on a sacrifice fly from Zach Zubia (Texas).

The Red Sox added to their lead in the fifth on a Quin Cotton (Grand Canyon) double that scored Jonny DeLuca (Oregon), as well as single from Beesley that scored Cotton for Y-D?s fourth run of the game.

Henley settled down nicely after the first, keeping Falmouth off the board until the fifth inning. Austin Langworthy (Florida) ripped an opposite-field solo home run after a bizarre ruling from the umpires gave the Red Sox the second out of the inning. Henley?s offering in the 2-2 count went in between the legs of Langworthy, and Handley, who reached first on a walk, stole second base. Langworthy was adamant that the pitch hit him, but the home plate umpire ruled otherwise. Handley then began to trot back to first, but Y-D shortstop Christian Koss ran and tagged Handley out before he could reach the base. Falmouth manager Jeff Trundy asked the umpires to confer about the call, but the result went unchanged.

Braidyn Fink (Oklahoma) entered in relief of Henley to begin the sixth and gave Coach Scott Pickler three incredible innings out of the bullpen. The southpaw allowed just a single hit and walk to the Commodores while striking out two.

Quin Cotton, Jonny DeLuca, Brad Beesley, and Christian Koss all contributed two hits apiece in the win. It shouldn?t be a coincidence that all four now have batting averages above .300 for the season. Y-D leads the league in the following categories: batting average, hits, on-base percentage, and OPS. The Red Sox have the second most runs scored in the Cape Cod Baseball League as well. With Friday?s win, the Red Sox also now lead the league in total points with 36.

Quin Cotton made a spectacular leaping grab to rob Cameron Cannon of an extra-base hit to lead off the sixth.

?Our pitchers are doing a great job of throwing strikes and keeping us in the game,? said Cotton after the game. ?I just had to go out there and make a play for them.?

The Red Sox have had their share of defensive miscues this season, but they?ve more than made up for it with a number of incredible plays out in the field.