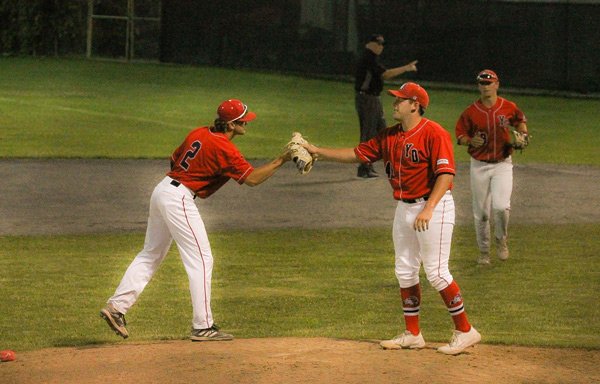 In their first trip over the bridge this summer, the Y-D Red Sox slowly chipped away at an early deficit before taking a lead they would not relinquish, beating the Wareham Gatemen 4-2 at Spillane Field on Saturday thanks to situational hitting and strong pitching.

Jared Lyons’ outing got off to a rough start, as the leadoff hitter Chase Davis reached on an error and advanced to third on a double from Hogan Windish. Max Anderson then singled them both home, and the Sox faced a 2-0 deficit before recording an out.

Lyons was able to work out of the first and put up a zero in the second, and the Sox got on the board in the third when Luke Shliger drove in Homer Bush Jr. with an RBI single.

Lyons allowed a hit in each of his first four innings and faced a bases-loaded jam with just one out in the fourth. With the Gatemen threatening to extend their lead and knock Lyons out of the game, he was able to get a shallow fly ball before striking out Windish to retire the side without a run crossing the plate.

“Just try to throw strikes, if they hit it they hit it,” Lyons said. “At that point in the game, it’s about getting quick outs.”

Lyons had to change cleats after that fourth inning, as his cleats had gotten “ripped up” and caused his toes to bleed. In the fifth and sixth, he retired each of the six batters he faced

While it wasn’t the smoothest victory, Lyons was happy to get “revenge” on the Gatemen after they tagged him for four runs in just three and a third last Saturday in an 11-3 Wareham victory.

The Y-D offense was able to scratch across runs in both the sixth and seventh to give Lyons the win. The tying run came via a bases-loaded walk from Jordan Thompson, scoring Caden Connor, who reached on an error earlier in the inning.

Some small ball in the seventh led to the go-ahead run. Hunter Haas led off with a walk, and Chase Meidroth followed with a single. After Shliger bunted both of them over to second and third, a Connor grounder up the middle was enough to plate Haas.

Three straight hits and another RBI for Thompson in the eighth added an insurance run, which was more than enough for Conner Thurman.

Thurman relieved Lyons in the 7th, and allowed just one hit over the final three frames, striking out three and never letting the Gatemen back into the game.

After the game, Thurman emphasized getting ahead in the count and forcing hitters to “get themselves out” as keys to his success.

On the season, Thurman has now just allowed two hits over seven innings of work with eight strikeouts.

Thurman also praised the offense’s ability to extend innings, allowing the Sox to never feel like they are out of a game, a key part in overcoming today’s early 2-0 deficit where the first two runs of the game came across after multiple batters reached with two outs.

The Sox will look to make it two in a row before a day off on Monday tomorrow when they’ll welcome the Chatham Anglers to Red Wilson Field. This will be the first of three matchups with Chatham over the next week.