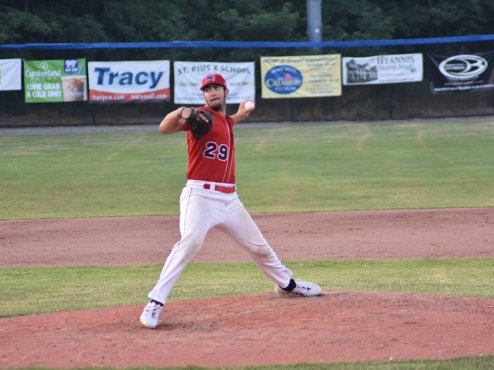 CHATHAM?The Yarmouth-Dennis Red Sox just didn?t have their best stuff on Saturday night as they fell to the Chatham Anglers, 7-3. The back-to-back losses are Y-D?s first since they were swept in a doubleheader on June 17th against Cotuit.

Karl Kauffmann (Michigan) got the ball for the Red Sox in Saturday?s tilt and struggled through three-plus innings. He retired the first two hitters he faced before allowing a solo shot to Chatham second baseman Michael Busch (North Carolina) that got the scoring started on the evening.

The two teams traded zeroes in the second and Chatham picked up an unearned run on a passed ball in the bottom of the third.

Y-D went down quietly once again in the fourth ahead of Kauffmann unraveling in the bottom half of the frame. The Michigan product walked the first two hitters he faced in the inning, then allowed an RBI single to Jorge Arenas (Stetson) before being relieved by Sam Kessler (West Virginia).

Though Kessler, an All-Star selection, has been excellent this season, he fell victim to the same fate as Kauffmann. The right-hander retired the first two batters he faced, then allowed a three-run dinger to Tristin English (Georgia Tech) that extended the lead to 6-0.

Alek Manoah (West Virginia) was excellent on the bump for Chatham, striking out twelve Red Sox in just six innings of work. The lone blemish on his ledger Saturday night was a Nick Quintana (Arizona) two-run bomb in the top of the fifth. The home run was Quintana?s third of the season.

After Kessler, Chandler Fidel (Little Rock Arkansas) came on in relief and threw two scoreless, hitless innings of relief. He picked up three strikeouts, walked one, and cut his ERA to below three with the effort.

Jeff Belge (St. John?s) was the second pitcher for Chatham Saturday night and he was just as dominant as his predecessor. Belge tossed three innings, allowed three hits, one run, walked one, and struck out seven. The run came on a Reese Albert (Florida State) bloop single with two out in the ninth.

Y-D used three pitchers after Fidel: Mitchell Tyranski (Michigan State), Braidyn Fink (Oklahoma), and Ryne Nelson (Oregon). Tyranski gave up a run in his only frame and Fink and Nelson combined for a scoreless ninth.

Just What the Doctor Ordered

The Red Sox will be off on Sunday evening for the All-Star game, though about a third of the team will be dressing for the exhibition. The off day will give the team a chance to regroup and attack the final two weeks of the season head-on after dropping back-to-back games for the first time in over a month.

Tristin English?s home run in the bottom of the fourth inning with two on and two out. The Red Sox were trying to get out of the fourth with minimal damage and it looked as though they might be able to hold the Anglers to just one run in the fourth, but English sent the first pitch he saw from Kessler over the left field fence to make it a 6-0 game.

The team resumes regular season play on Monday, July 23rd, with a tilt against Bourne. First pitch from Doran Park is scheduled for 6 p.m.