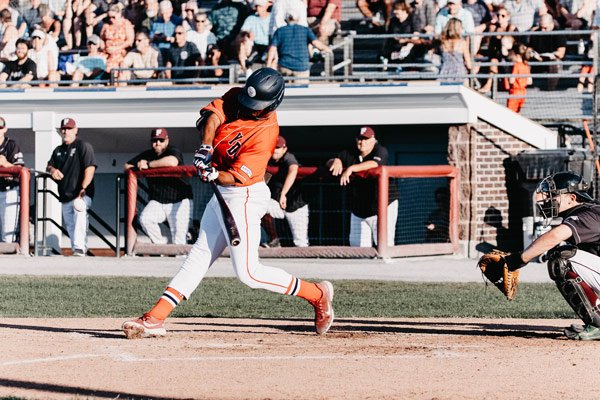 Coming out of the All-Star break on Monday, the Y-D Red Sox held an 11-point division lead with a magic number to clinch the East division of just four points. Clinching the division seemed like a question of when not if.

Five straight losses later, the lead is now just four points, the magic number is at three points, and what seemed like a foregone conclusion could now be in question heading into the team’s final three games of the regular season.

The Red Sox lost their fifth game in a row on Saturday, falling to the Falmouth Commodores 6-4 at Guv Fuller Field on Saturday.

“I just thought we made too many mistakes, we make the error in center field and the error at first base and give them four runs, we can’t do that,” Y-D Field Manager Scott Pickler said after the game.

The Sox fell behind 3-0 quickly, as Drew Bruthcher singled with the bases loaded in the first inning and Homer Bush Jr. bobbled the ball in center, allowing a third run to score.

Y-D was able to get back in the game, however as Braden Montgomery drove in their first run on an RBI triple in the third, and Hayden Schott drove in a run on an RBI single in the sixth.

Grant Taylor entered the game to begin the third and worked 3.2 innings of one-run ball. The lone run charged to him scored after he exited the game, as Luke Jewett gave up a two-out double to Josiah Cromwick in the bottom of the 6th.

Y-D had a prime opportunity to tie the game in the 7th. With Falmouth leading 4-2, Woody Hadeen hit a ground-rule double, putting him at second and moving Bush Jr. to third.

With two in scoring position, just one out, and one of the fastest players on the Cape 90 feet away, it seemed all but certain that the Sox would at least be able to get within one. Instead, Montgomery struck out and Schott grounded out to end the inning.

Falmouth doubled their lead in the bottom of the 7th. Alex Mooney led off the inning with a solo home run and Andrew Pinckney added another on an RBI single to make it 6-2.

The Sox were able to score two more in the eighth, but the deficit was too much to overcome, and the 6-4 score remained the same until the final out.

Pickler noted that while the plan has been to rest guys and set things up for the postseason, he has to balance that approach with the fact that the team needs to get some momentum before opening the postseason on Thursday.

“The energy level is down, we’re dealing with some adversity, waiting for someone to pick it up,” Pickler said. “We have to find some momentum… we have to find our way out of it. It’s a tough thing to do.”

This is the Sox first five-game losing streak since 2016 when they lost the first five games of the season. Those Red Sox rebounded nicely, as they won 26 of their final 39 games and went on to win their third straight championship.

Y-D fans can hope for a quick turnaround and a similar finish this postseason, but for now, the losing streak continues and the division race grows tighter.

The Sox return home tomorrow, as they host the Hyannis Harbor Hawks. It’s the penultimate home game for Y-D, as they’ll travel to Chatham on Monday and finish the regular season hosting Brewster on Tuesday in a potential division-deciding matchup.